Somalia has pirates. They have been quite a nuisance for maritime shipping in the Indian Ocean ( Red Sea, Gulf of Aden, Gulf of Oman, Arabian Sea and Somali Basin). After innumerable cases of piracy and wanton killing of innocents thirty countries (India is not one of them- perhaps with good reason, as this Force has close links with t US Navy’s 7th fleet) decided to form in January 2009 a Combined Maritime Force (CMF) to patrol these man endangered waters. They were guided by UNSC Resolutions 1816, 1838 etc. Its based in Bahrain. It has two wings: CTF 151 fights piracy and CTF 150 ensures some version of Maritime Security. Piracy has decreased. Perhaps, because the UNSC Resolutions provided for prosecuting and jailing them from 2015 onwards. Three prisons in Somalia have already been prepared.

Luckier are smugglers of heroin.

On the 23rd of April the Australian Navy’s frigate HMS Darwin was patrolling the seas about 30 kms within Kenya’s coast line off Mombasa, when they intercepted a dhow with nine people on board. 1032 kgs of heroin was recovered. The crew of eight and the Pakistani escort of the heroin were released -without interrogation.

They were within Kenyan waters. The proper procedure would have been to hand them over to Kenyan authorities. This they deliberately did not. After the Australian High Commissioner Geoff Tooth was given a dressing down by the Kenya Foreign Ministry, the first report was conveniently modified to show that the seizure and inexplicable destruction of material evidence was done outside Kenya’s territorial waters. That it was made within Kenya’s waters was first reported by the usually reliable Jane’s Navy International http://www.janes.com/article/37619/australian-frigate-makes-second-largest-ever-heroin-seizure . 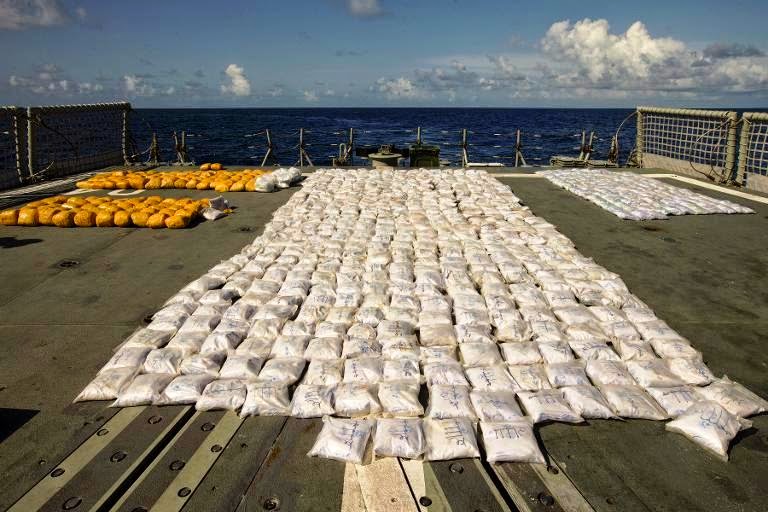 Below-  The dhow from which the seizure was made after release. 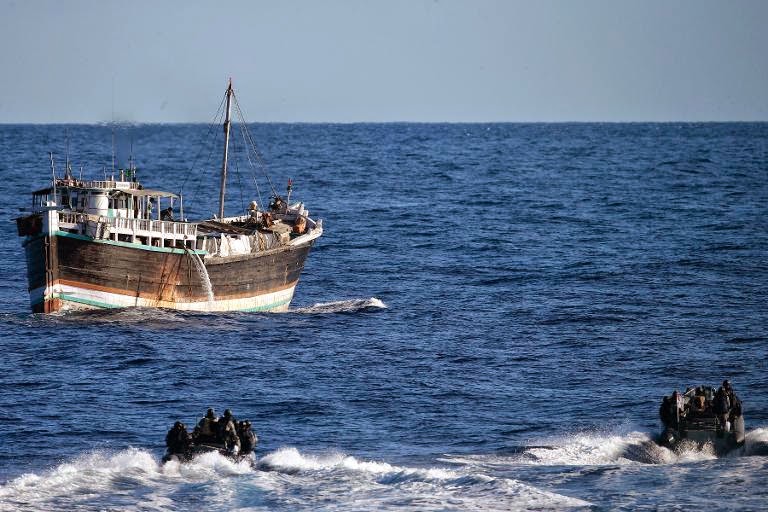 This is illegal and unprofessional conduct. Six (Australia, Canada, France, Germany, UK and USA) of the thirty countries that form the CMF presume to have the capability of teaching other countries on drug law and matters.

The dhow was allowed to go on to Mombasa, which it reached early on the 24th- proof that the seizure was within the territorial waters of Kenya. The crew took the help of one Aliba of Mombasa, who got them air tickets to get back to Gujarat and for the Pakistani organizer to Pakistan- safe and sound and unperturbed. Kenya later arrested three from Mombassa for questioning. Lot of time had been wasted on account of this tenderness towards narc traffickers.

On return the Indian crew was interrogated by the Jamnagar Special Operations Group (SOG) of Gujarat Police on the 2nd of May. They learnt that the dhow “Lakshmi Narayan” was registered in Verawal and was rented by its owner Ashok Parmar to  Salaya-based Haji Bashir Doud alias Hajibhai Kathiriya alias Raja in October last year .  The Captain’s name was Isha Hussain, who had a crew of seven. The dhow carried sheep and goats and left Tuna Port, Kutch (next to busy Kandla Port) on the 3rd of April. It reached Amaraiya jetty of Dubai on the 8th and then reached Sharjah. There cement and water tanks were loaded on to it.

The loading was supervised by Raja, who also asked the Captain to carry a Pakistani sailor – Ashraf Mohmad- to Mombasa, Kenya. Raja also told them that the Pakistani Ashraf would guide them to a pre arranged spot on the high seas from where they would pick up a ton of supplies for Kenya. Raja paid the crew large amounts in cash.
The rest is a tale of unsurpassed incompetence and already told above. Had the crew been interrogated on the spot or in Mombasa the Pakistani agent would not have got away and almost the whole truth and big time connections could have been unearthed. But that satisfactory consummation was denied. All that we have are rumours and conjectures. One gossip says that this consignment was going to China, which has just entered into a $ 3bln deal to build a railway  from Tanzania through Kenya to Somalia. Kenya also has a growing number of heroin users- about 60,000 according to US State Department’s International Narcotics Strategy Report of 2012. Kenyans have also arrested three people- a Kenyan, a Tanzanian and an Asian,but they don't say who

There have been many seizures of Afghan heroin in these waters by the CMF this year. On the 7th of April 130 kgs of heroin were seized and destroyed with similar disdain of law and procedure.  NATO statistics show that while piracy incidents have fallen, smuggling of heroin has increased. The ship’s commander, Terry Morrison, reportedly said the heroin seizure will put a dent in terrorist funding networks.
"These drugs have now been seized and are about to be destroyed. It’s well known that these drugs assist terrorist organisations through funding so that they can conduct violent acts," he said.
Not to have arrested all involved is simply unbelievable. How can a Government official speak so amateurishly! Does he think that every one is gullible? Meanwhile the Australian Government has given a clean chit to Kenya that no one from that country is involved! How do they know? Without investigation? http://www.coastweek.com/3717-latest-news-Australia-government-assures-it-has-no-evidence-to-link-Kenya-to-seized-drugs.htm  The Kenyans have arrested three.

A fairy tale seizure will soon become a nightmare. Evidently some of the member countries of the CMF were worried about handing over these criminals to those countries that had death sentence for narcotic crimes. Forgetting that many of their own member countries- Thailand for one- have death sentences for even drug pedlers. So, these thirty member countries connive in trampling established laws, convention and multilateral treaties on some half baked, untested, idea that rejects the possibility of a death penalty, and release the criminals. Can anything be more stupid? And there are no written agreements. If they are so sympathetic to narcotics traffickers why should not these countries, US, UK and others and the UN be tolerant of the poor opium cultivator in Afghanistan?

Every now and then worried reports appear in newspapers wondering what will happen to drug trafficking from Afghanistan and Pakistan once the US leaves Afghanistan. After twelve years of occupation, and spending $ 8 bln on anti narcotics work what have they to show? Nothing. 210,000 hectares of opium fields this year (the largest ever so far), 3 mln opiate users in and around Afghanistan and more and more evidence of an avalanche of drugs (including hashish) coming out of that country. With this increase in cultivation seizures of heroin on the seas have also increased.

Where earlier 10 kgs would send officers into paroxysms of frenzy now 500 - 1000 kgs are run of the mill. From Indian,  Iranian and Pakistani dhows mostly- and going as far as Sri Lanka and the East coast of Africa. Not one of them has been seized. Not one of the culprits have been arrested. All released promptly so that they can return and traffic more.

Afghan and/or Pakistani heorin and brown sugar seizures from the Indo-Pak border have increased immensely this year. From Punjab border alone 366 kgs of heroin was seized in the first quarter of 2014. The total heroin seized from the Punjab border last year was 336 kgs. Many countries are heading for trouble, and if such imprudent and scatter brained operatives are allowed to rule the waves ther will be much more of it.
Posted by Bame Duniya at 4:29 AM