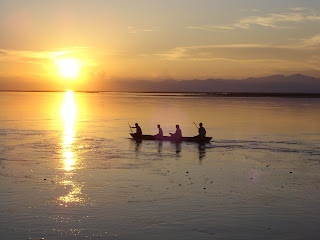 About a month ago Arabinda Rajkhowa, Chairman of the United Liberation Front of Assam was arrested by the helpful Government of Bangladesh in Dacca. On the 4th of December, 2009, he, his family and some of his followers were handed over at 03.30 hrs at Dawki Land Customs Station in Khasi Hills, Meghalaya. Dawki is on the border with Bangladesh.

A minor controversy has errupted whether he was detained, arrested or he voluntarily surrendered. Does it really matter?

What matters is that a dreaded terrorist, who while insisting on strenuous jungle life and brutal urban terrorism for his followers, himself hid in plush comfort in Dacca since 1997 or so, is now behind bars.

The ULFA Chairman’s Arabinda Rajkhowa told the journalists at the CJM’s Court in Guwahati on the 5th of December that he had been arrested and had not surrendered. Paresh Barua, Chief, ULFA’s rag tag armed wing, said that that comment was a moral victory for ULFA!

ULFA preaching morality? This outfit that has cost thousands of innocent and misguided lives is now so toothless that it can only talk about moral victories, which are meaningless. Let them have a myriad of these.

Did they think about the morality of the many murders they committed in their arrogance?

In early February, 1991 between Hansara and Jhangi, before Jorhat, Assam, I saw from the Gypsy that I was driving about 20 meters ahead two men on a scooter shoot a cyclist as he was coming up from a house on the left had side of the road. It happened so quickly that first I thought that the cyclist had collided with the scooterists. I stopped to help the fallen cyclist. I was shocked to find that he had been shot in the chest, and was dead. By that time his mother had come up and there was an emotional scene too sad to describe. They were poor people and her son was from a neighbourhood social work organization that had refused to support the ULFA in its violent programme. I tried to chase the scooterists down but they had disappeared down one of the several leafy side lanes that dot the AT Road. This hit and run was typical of the tactics of the ULFA.


There were hundreds of such pointless executions. The ones that caused wide spread revulsion and intense disgust were the bomb blast on Independence Day at Dhemaji in 2005 that killed 13 children, and the pointless killing of a young and innocent Andhra engineer (son of very poor parents) near Naharkatia, in Upper Assam in 1995. Did such brutal acts make them feel powerful or even popular? They certainly made the ULFA filthy rich because these killings made people take their threats to kill seriously and then pay up.
The many unpardonable and unprovoked excesses of the uniformed forces was the direct result that only hammered innocent civilians most.

This then is the organization which now that it is beaten and on the run finds it convenient to talk of moral victories! Apart from still mouthing the discredited concept of independence for Assam, which no one but a few die hard supporters, who are nothing but extortionists, believe in now.

ULFA was however partly responsible for the prosperity that one sees in Assam. That is undoubtedly true. Roads, Industrial Estates, Multi billion projects, Bridges, Schools, Colleges, Industrial infrastructure, Railway lines and Medical colleges. 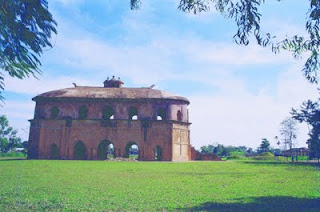 Ranghar, Sibsagar- where ULFA started on the 7th of April, 1977

Before the 7th of April, 1979, all Assam was a sorry under developed sight. No electrictity, bare minimum of non Assamese managed commercial activity, which was exploitative in nature, and very slow, almost reluctant, progress. From the 7th of April, the day Arabinda Rajkhowa and several others swore at Ranghar, Sibsagar, to fight for a better Assam, conditions began to change.


The attention that ULFA got the NE has caused wide spread employment and improvement for many Assamese. I was in the North East from 1985 till 1991 and was witness to much violence and repression and also slightly faster progress. Infact for a while I was an admirer of the ULFA. After their misdeeds and galloping greed became a matter of deliberate policy I abhorred them. They were no longer Knights in Shining Armour, but run of the mill gangsters. The Assam of those years had much to protest about, but not in their chosen way.

For the Assamese the genteel, tender and fond appellation of "larka log" (our boys) of the earlier years truend into disgusted contempt. And yet they have the inordinate gall to pretend to speak on behalf of the people of Assam!

The lighthouse that the ULFA promised to be through the 1980s became a flickering candle for their rank and file. That too was extinguished for them from 1997 -1999 when their leaders deserted them for foreign comforts. After that it became an organization known exclusively for its expertise in extortion and barbaric cruelty.

“Today, the dirty machinations of the colonial Indian Government have been defeated in the hands of the freedom-loving peolle of Assam. This will only enable us to march ahead into the future.” Paresh Barua said yesterday. He has been blowing away millions in Bangladesh for more than two decades. He has not been to Assam. Otherwise he would not have made such a stupid statement. 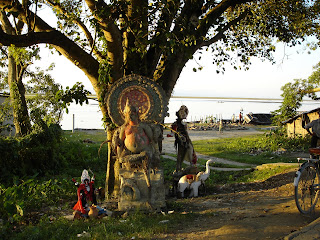 ... and peace has returned to Assam.

Posted by Bame Duniya at 4:31 AM No comments: