Below is an extract from an article I stumbled upon recently. The thoughts are worth reading and considering, but acting upon them will be folly. Some time back the Mumbai based Indian mountaineer Harish Kapadia had suggested that all this entire area be turned into a park. A park!!! So that people from both sides can appreciate the rugged majesty of the Great Karakoram.

I cannot support this idea, for we can not trust Pakistan, much as I support the idea of us being friends. With our forces gone there is no doubt that their forces would sneak in. To all those people that say that this area is worthless, my reply is that this beauty is priceless.

However read on. It is a very good article and I have given the link to the rest of it. If you further explore Dr. Wheeler you will be surprised that he is a latter day Rambo Reagan, who believes that Capitalism is the cure all for all the ills in the world, everything American is right and Communists practice Black Magic!! This is much before Wikileaks. Poor sap. Wonder what he must be feeling now that the carefully built puppet regimes of the US in the the Arab world are rapidly falling. Yet, he is not all mad, as can be seen by his comments below:


" Comments about the Indo-Pak stand off on Siachen-


Here is a picture I took of a map in a tiny Pak military encampment: 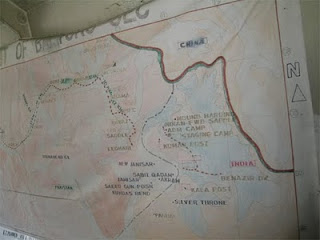 I hope you can make it out. The solid red line is the border with China. The dash-dot line snaking down perpendicular from the red line is the Line of Control (LOC), the de facto border to the left of which is Pakistan, to the right India.

The dashed red line on the Pak side is the flight path of the helicopter pilots to resupply the troops. It follows the Baltoro Glacier up to Concordia (marked on the map at 15,900 feet) then turns right and heads for Siachen.

Note on the Indian side the position closest to the LOC is the Kumar Post. This is named for the legendary Indian Army mountaineer who first explored this entire region in the 1950s, Col. Narinder "Bull" Kumar.

Seeing this map marking the Kumar Post brought a big smile to my face, for Col. Kumar has been a good friend of mine for many years. It was Bull who organized my expedition to raft the Zanskar River in the remote region of Indian Tibet in 1993.

It also brought a smile to my son Jackson's face, for he and I had lunch with Col. Kumar at the Delhi Golf Club just a week before.

Nothing characterizes the "lunacy of the legacy" of British India splitting apart than this pointless war 21,000 feet high in a glacial wasteland, where thousands of soldiers have died of frostbite, exposure, and altitude sickness, many more than have died in actual fighting.

The whole situation makes China very happy. As long as the armies of Pakistan and India are obsessed with hating and fighting each other, China gets to be Asia's only superpower and push everyone around.

China's greatest fear is peace between Pakistan and India. Should these two countries decide to "Make Money, Not War," to settle their differences and focus on how to bring free trade and prosperity to their peoples, the result would be a huge threat to Chinese hegemony in Asia.

A market bigger than China's (1.4 billion including Bangladesh vs. 1.3 billion) where all educated people speak English (English is the official language of both India and Pakistan) would be a magnet for foreign investment, sucking it out of China.

China would at last have an Asian rival, capable of standing up to it economically and militarily. If only the Pak and Indian armies could figure this out, that they could play significant roles on the entire Asian stage instead of bloodily dicking around on lost glaciers no one really cares about.

So as our helicopter lifted off from Concordia and we had our last glimpse of K2 as we started down the Baltoro Glacier, I had a flash of fantasy.

What if this magical name of Concordia stood not just for the most magnificent scenery on earth, not just for a gigantic glacial confluence, but the place where a concordance was finally reached between India and Pakistan? Where war was abandoned in place of doing business together? Where each country saw a vision of how flourishingly successful they could be through mutual cooperation, rather than how they can annihilate each other?

Well, it's a nice fantasy, I thought, one with the delicious side-benefit of really shafting the Red Chinese. Still, our coming here was once a fantasy. And now it had actually happened. About one thing I had no doubt - that I will be here and do this again next year.