Needless heartburn in India over a reported dam in Southern Tibet, BUT... ....what's the harm, especially when our Know Alls did not even know about the dam over the Indus built in 2004!!


The first picture is of a dam over the Indus built by the Chinese. It is a dam that exists. The first picture is taken from Google Earth. The second is taken by me of Demchog. The big buildings are part of an optimistic market built by the Chinese in their part of Demchog. The electricity produced by that dam has come till Tashigong, about 15 kms beyond this Demchog. 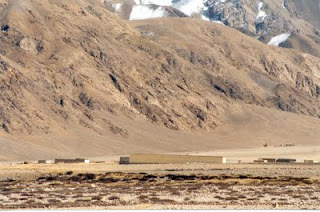 Unlike the so called dam the Indian Express front paged in an article in its 15th October, 2009 edition that China is supposed to be building over the Brahmaputra in the Nanshan Prefecture of Tibet, this one over the Indus exits. Yet, there have been many worried analyses of this yet-to-be-confirmed construction, and our . Funny isn't it? The Chinese have denied it, and these reports are at best speculative.

This dam can not hurt India as 80% of the waters of the Mighty Brahmaputra are picked up after it enters India.

The Mighty Brahmaputra as it makes an 'S' Bend when it enters India below Spur Top is a smallish river. After that it picks up considerable waters from the Yangsang Chu at Jidu, the Siyom and the Sipi at Yembung and several others before it leaves the hills at Passighat. Around this place it more than doubles its size with the waters from the Lohit and the Dibong. After that its right bank gets the Himalayan rivers like the massive Subansisiri, the wide Kamala, the Rong, the Kameng (Bharoli), Aie, the Saralbhanga and about forty others. Its south bank too gets waters from copious rivers like the Burhi Dihing, Namdang, Dhansiri, Kalang, Kopili, Digaru, Bajbala and thirty others. These make the Mighty Brahmaputra the size that it is. Not Chinese waters.

BUT, what is more worrisome is that since 2004 China had built a run-of-the-river largely earthen dam across the Indus. It is only 100 kms or so away from the India-China border at Demchog (Ladakh), and no one has as yet mentioned it even!

It provides water for civic and agricultural needs in the Ngari Khorsum province of Western Tibet. It gives electricty for 24 hrs and round the year for the fast expanding and developed towns of Ngari and Shiquanhe (Ali in Tibetan). The former is just 15 kms west of the dam and the latter is 25 kms NNE of it.

Even though the Indus at this point and even after it has entered India at Demchog is a fledgling river there is no excuse for our spies and their latest devices not to have detected that a dam was being built more than 5 years ago. The Indus is even more of a small stream, than the Brahmaputra when it enters India, where this dam has been built. It is before its confluence with the Gargunsa Chu- the river that comes past Gartok, the ancient trading centre of Western Tibet and now a thriving electrified busy town.

Does not say much for the observation capacity of the intelligent people trained to be on the look out for just such a development, amongst others! What is worrying is not that the dam has been built, for what is wrong in building a run-of-the-river dam, but that our snoops were not able to discover that it was being built and later that it had been built! And our usually alert and alrmist journalists too are ignorant about it! This dam has subsequently been mentioned in a book called "The Empires of the Silk Road". 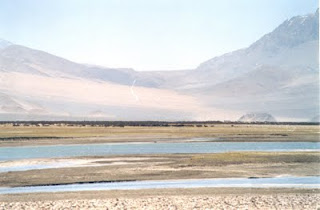 The picture above is of Chang la or Dumchulle La, which is since October 1962 with China. The International Border runs along the ridge. The Chinese have got territory well inside India. More than 20 kms of it here. At the base of the spur to the right is a large Chinese market selling Chinese goods. The annual turnover of this market is reportedly more than Rs. 100 crores. The customers are the Indian Changpas- the nomadic shepherds who hop from one ribo (camp) to another with their flocks of pashm goats. The markets in Nyoma, Leh etc aree filled with what they buy here. The considerate shopkeepers sell goods on credit and do not mind waiting for months for money to be paid. This market is a source of information. And, many of the Changpas who come here are supposed to bring back information to their handlers in Dungti, Loma Bend and Kiari etc. In October 2003 when this picture was taken by me I had heard reprots from some Changpas that a dam was being built over the Indus. I am sure that such reports must have been received by the intelligence agencies too. Yet, we were completely ignorant of its construction. And even now are. Dumchulle is on the right bank of the Indus and not far from the recently revived airport at Fukche, near Koyul. 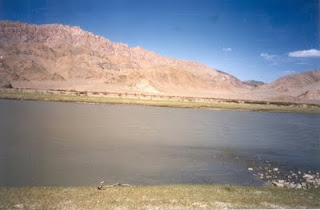 That is why the status quo of this picture above has not troubled any one since October 1962!

This is of the Indus near Umlung, 20 kms before Demchog, in Ladakh. The other bank of the Indus is in Chinese hands. The International Border ought to be the Thag La pass 20 kms further and seen here. It is on the southern side of the watershed and yet instead of taking back this singularly unacceptable occupation all that we can think of is- Aksai Chin (about 45,000 sq kms), which is as impossible for us to acquire as it is for the Chinese to even dream about getting Arunachal. There are more than 5000 sq kms of Ladakh, on the southern side of the watershed, that is occupied by the Chinese since October 1962, and this vast almost continuous swath is not even being mentioned at negotiations. 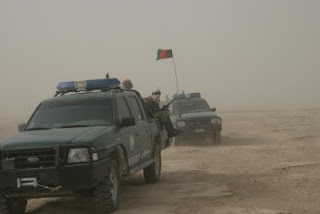 Every one who can read has heard of Afghanistan and the United Nations.
How many have heard of Peter Galbraith? I had not till September, 2009.
He was till a week or so ago the United Nations' Deputy Special Representative for Afghanistan.
What I did not know was that he was the only gutsy and principled official that the UN had. Now he has gone. Made to leave within six months of joining at Kabul. It only proves that the UN will remain a shadowy organisation lurking around the fringes of power and supporting status quo, when change is what is needed.

Especially in Afghanistan. The recent monumental fraud in Afghanistan, blessed by the UN as an election, if consecrated will make Afghanistan uncontrollable. This is what Peter Galbraith had protested about. He had said that most of the votes cast for President Karzai were fake. He also accused Norwegian Kai Eide, his senior, of failing to act upon evidence of electoral fraud.
Mr Eide responded by saying he had the full backing of the international community and the US administration, which does not mean that Mr. Eide, the International Community or the US Administration are right. Infact the last two have a history of being wrong as far as Afghanistan is concerned.


Everyone in Afghanistan knows that ballot papers in nearly every polling booth were stuffed with fake votes for Karzai. Most election observers knew about it. And yet neither the International community nor the UN uttered a squeak, till Peter Galbraith legitimised all the rumours. Well done.

Nothing less could be expected of the son of John Kenneth Galbraith. I wish him well, for with such principles he will have many opponents.
If Karzai returns there will be a "slim possibility of peace and the probability of a longer, wider, more dangerous war."- quoting Richard Tanter — out of context. Romesh Bhattacharji 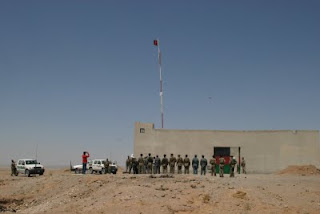