Chumar- Its location and explanation

With five Chinese intrusions in the past forty days, and several off and on in the year past, Chumar has been in focus for quite some time. Some of the Chinese intrusions were comic. Some months ago they painted some silly slogans, asking Indians to leave, on some rocks
near the International Border. 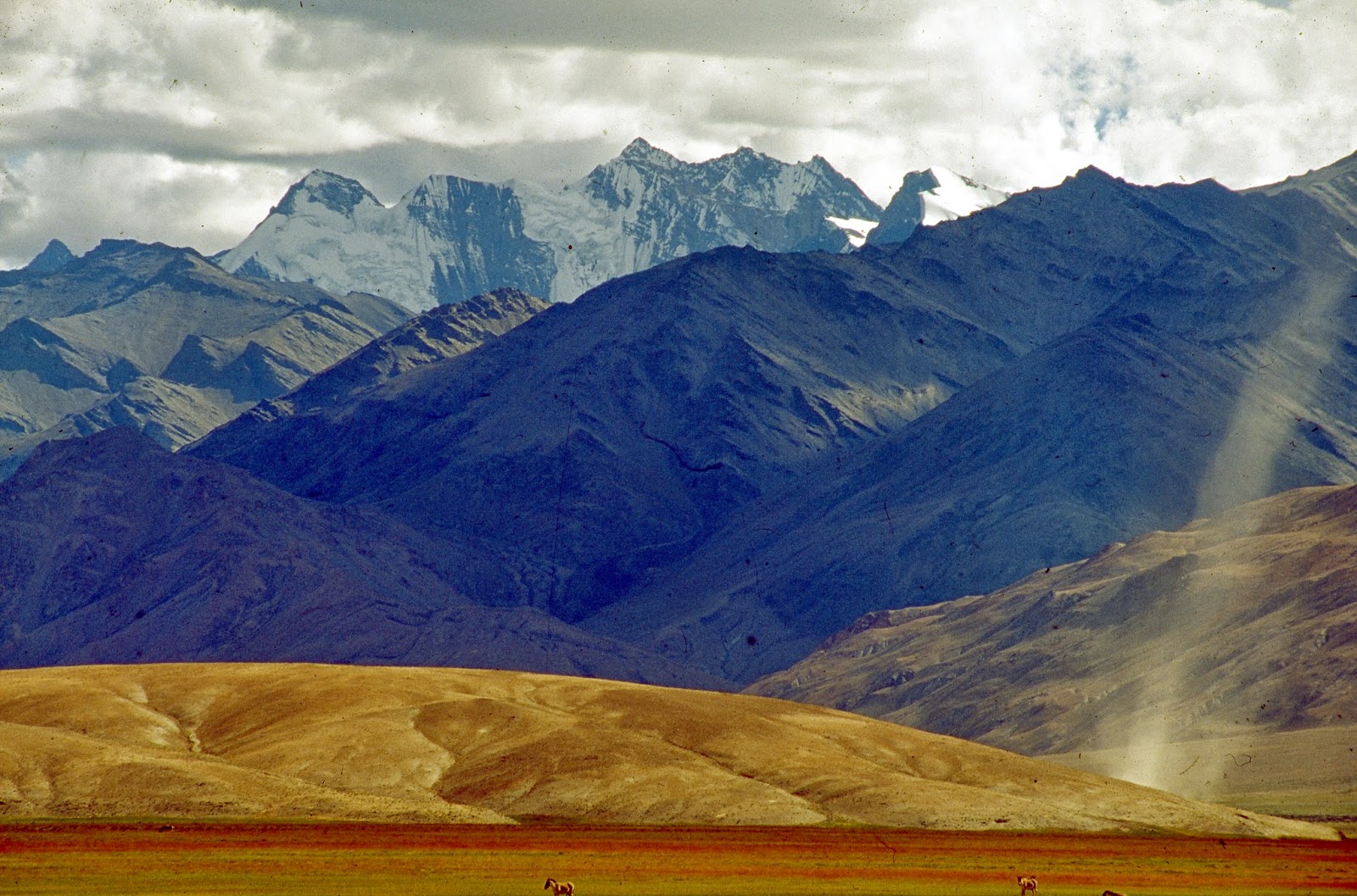 -- The Tegazung Plain and Gya peaks (6333 mtrs asl). Chumar Post is beyond the hump in the foreground.  Some Kyangs and a twister can also be seen. Its not as grassy as it looks. Each tuft of grass is about half a metre apart, and hence the dust spiralling up with the wind.

Chumar is in the SE of Ladakh and has been connected by an untarred but comfortable road for more than three decades. It is not remote for Indians.

But for the Chinese it is.

The Chinese area that is contiguous to Chumar sticks into India's Ladakh and Himachal Pradesh like a thumb. For the Chinese it is one of the most difficult to reach regions in Tibet. The base of the thumb is cut off by a 19,000 ft (5900 m) high ridge- Drongmar, which can be seen from Shipki la 13,300 ft (4000 m) . There is one rough Chinese road that goes over this Drongmar Ridge , which is perhaps closed for at least 3 months because of snow.  This ridge is pierced  by only two las I think. One is Botbotla and the other is Sunga or Drongmar la 16,728 ft (5100 m). This thumb of Tibet was once part of an ancient kingdom called Guge, and may also be called that now, I think.  The area of this thumb could be about 2000 sq. kms..  There may be at most around half a dozen villages, and as far as my information goes none near Chumar.

A decade ago some Indian goods used to trickle down to these Chinese villages from Chumar. During some severe winters I had heard that people from these villages would come to Chumar village for help, as it was impossible to go to the adjacent Chumurti Valley (Satluj flows here) in Tibet for supplies. Perhaps conscious of this isolation the Chinese are increasing their presence and incursions. Earlier a couple of them would take a step or two into Indian territory shout slogans and scurry back. The latest incursion on the 9th of July was reported to have been made by about 50 Chinese soldiers on horses!  They will be full of sound and meaningless fury before the winter closes in. There could be more such intrusions near Chumar before winter starts- for the Chinese troops are at their weakest here. Our soldiers are disciplined but these mounting provocations could cause problems.

The maps available to ordinary Indians do not give an idea of the topography at all. Our Government thinks that by making large scale maps accessible to all Indians would impair India's security.

I have got much better maps than are available locally from the internet.  Two good sites are the Russian http://www.topomapper.com/ and the American www.lib.utexas.edu/maps/ams/india/ . The former is a better site. The second and hird maps below of Chumar are from topomapper. 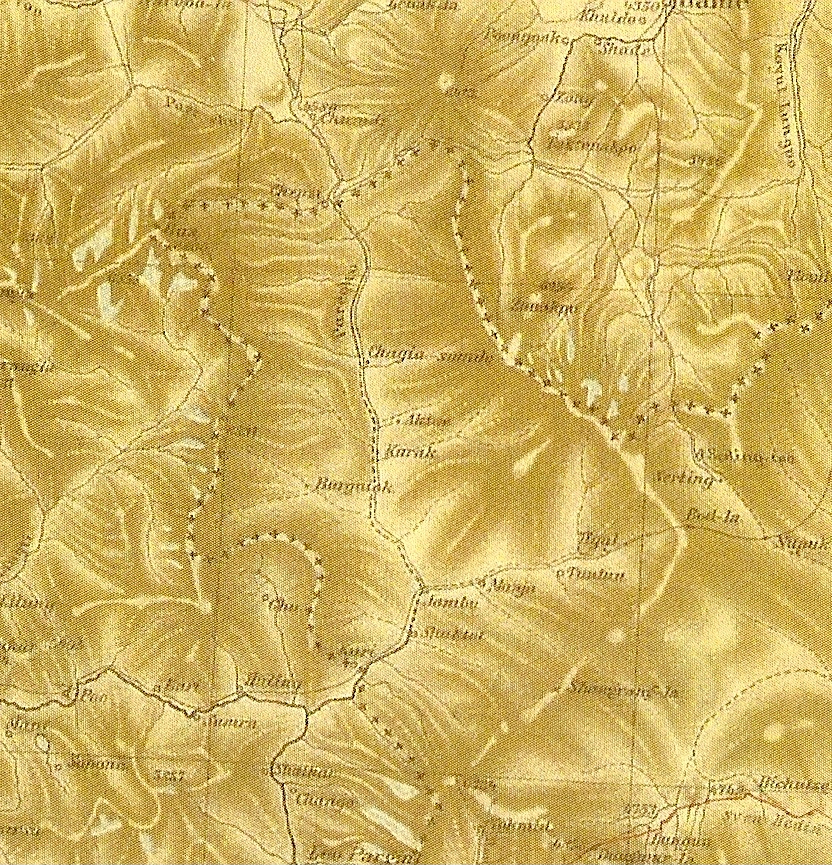 The map above is from Sven Hedin's 8 Volume Tran Himalaya. Though he did not visit Chumar in his trip of 1905-6 he made this map by asking people from Shipki and Namgia villages. 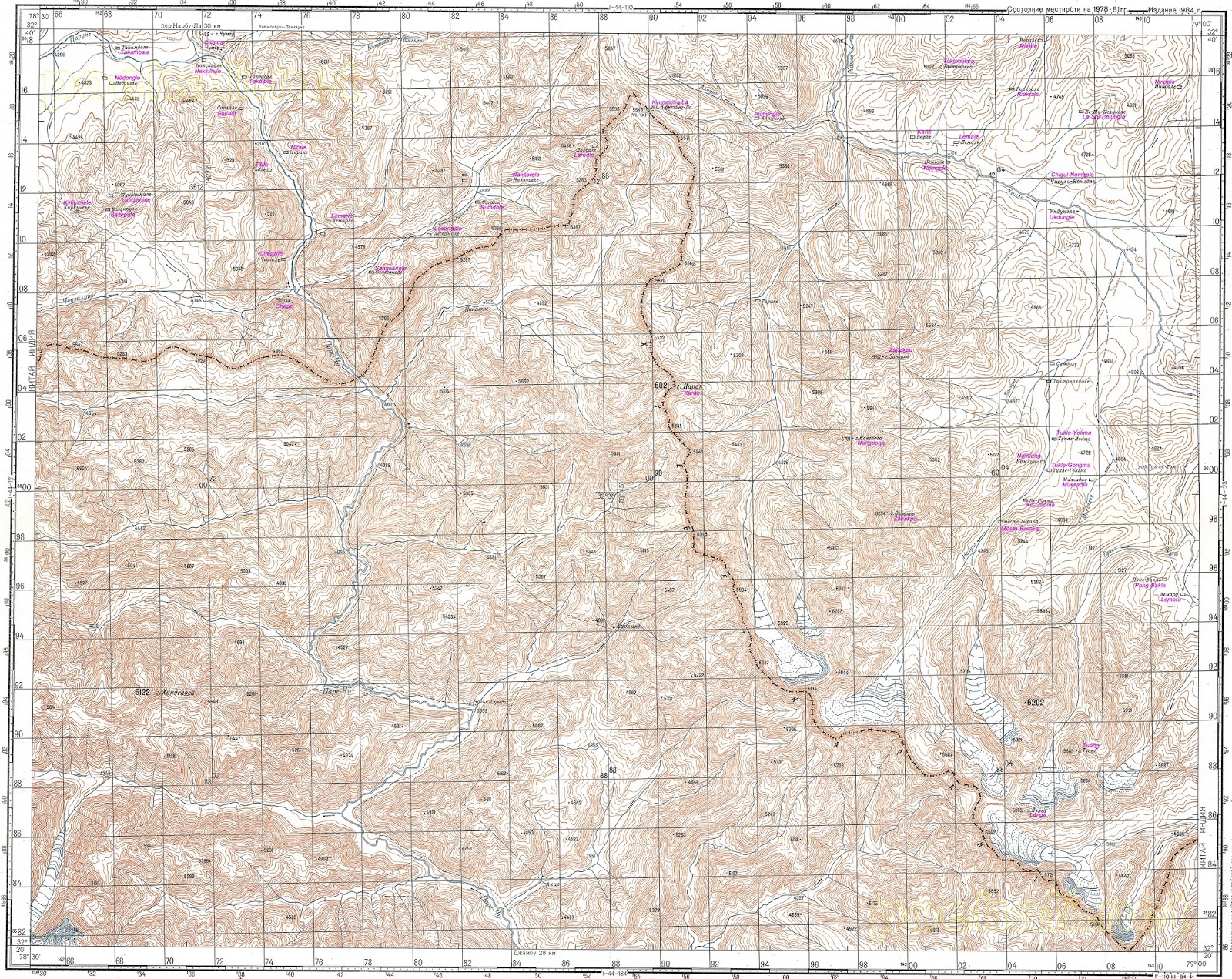 Map above is the Russian map of Chumar and the Chinese areas south of it. Some Russian names have been translated into English. Gor this map and the one below I have to thank my friend Hermann Soldner from Upper Bavaria.

The Chinese area opposite Chumar is drained by the Pare chu which rises from Parang and Takling las in Spiti, goes to the Thumb of Chinese area, and then is prevented from meeting the Satluj (or Langchen Khambab in Tibet) by the Drongmar Ridge. It re enters India (Himachal Pradesh) and meets the Spiti river near Sumdo at a place called Shugar.

Below are pictures from Google Earth of the terrain that I have written about above.  They demonstrate the utter uselessness of being secretive about our maps. 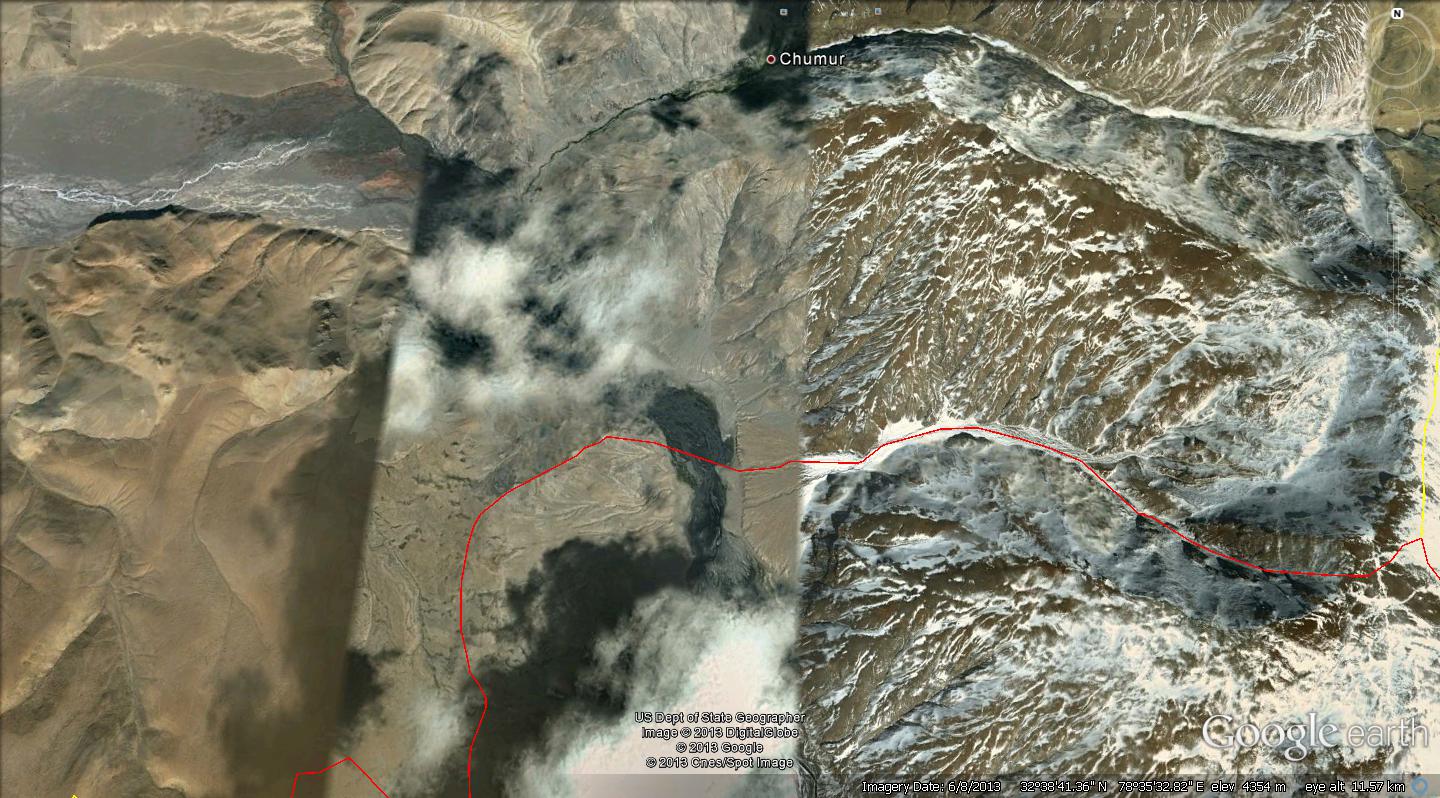 This image above shows Chumar and the areas below it. The red line that cuts the plain of the Pare chu indicates the Chinese claim line.

The Google Earth image below shows a larger area. The top  red line shows the Chinese claim line and the lower red line indicates the line that Indians have. 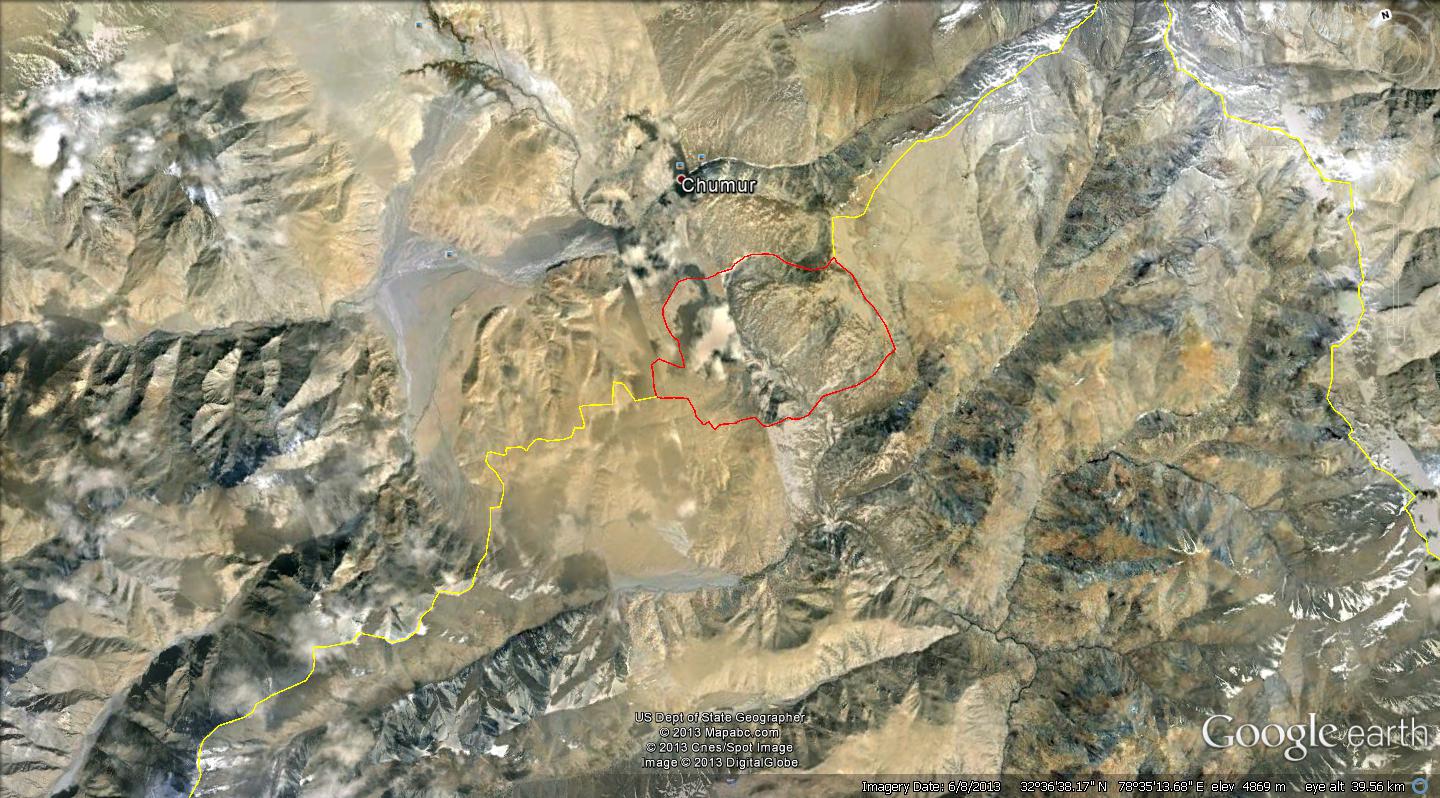 Below are a series of images of villages in the Chinese area:
Azi village> 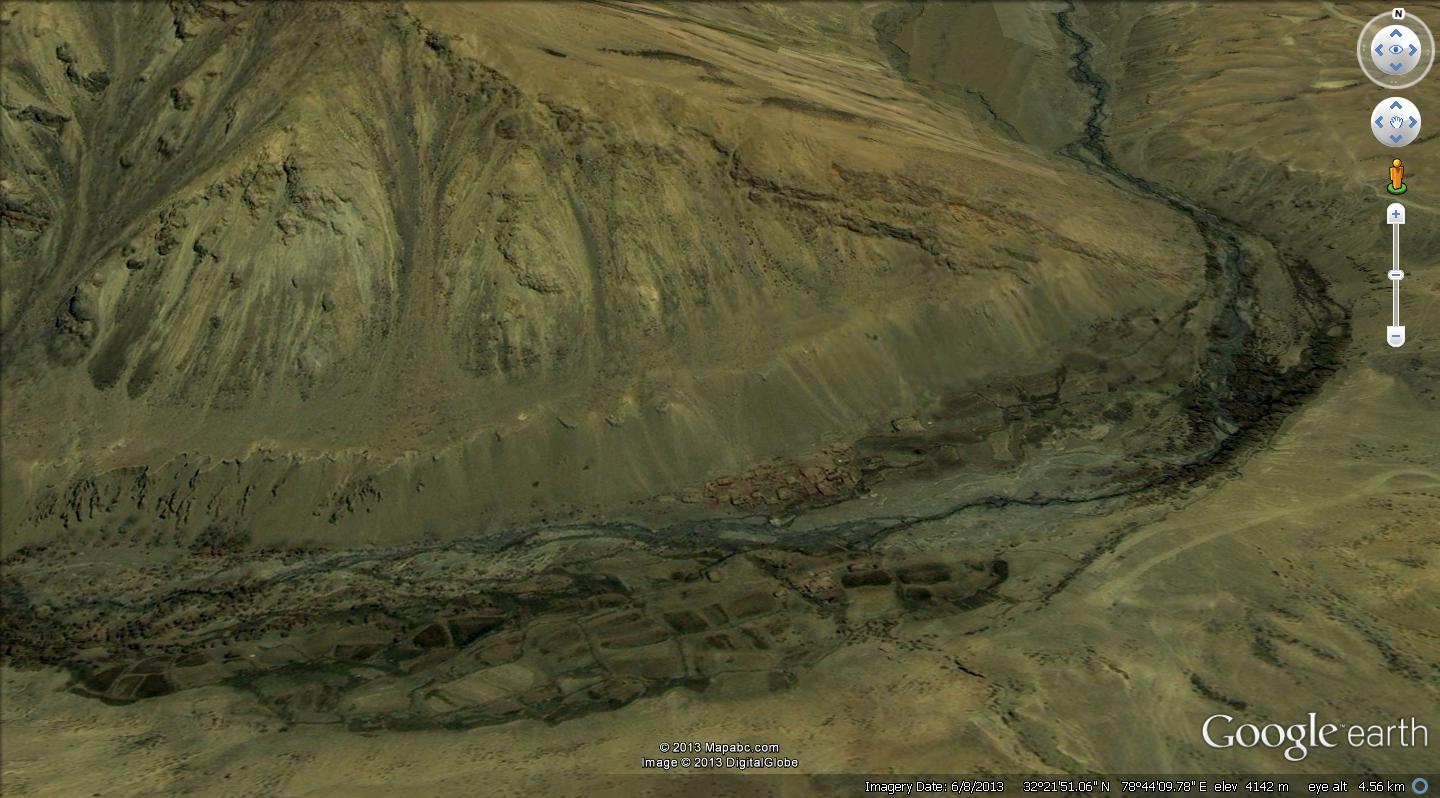 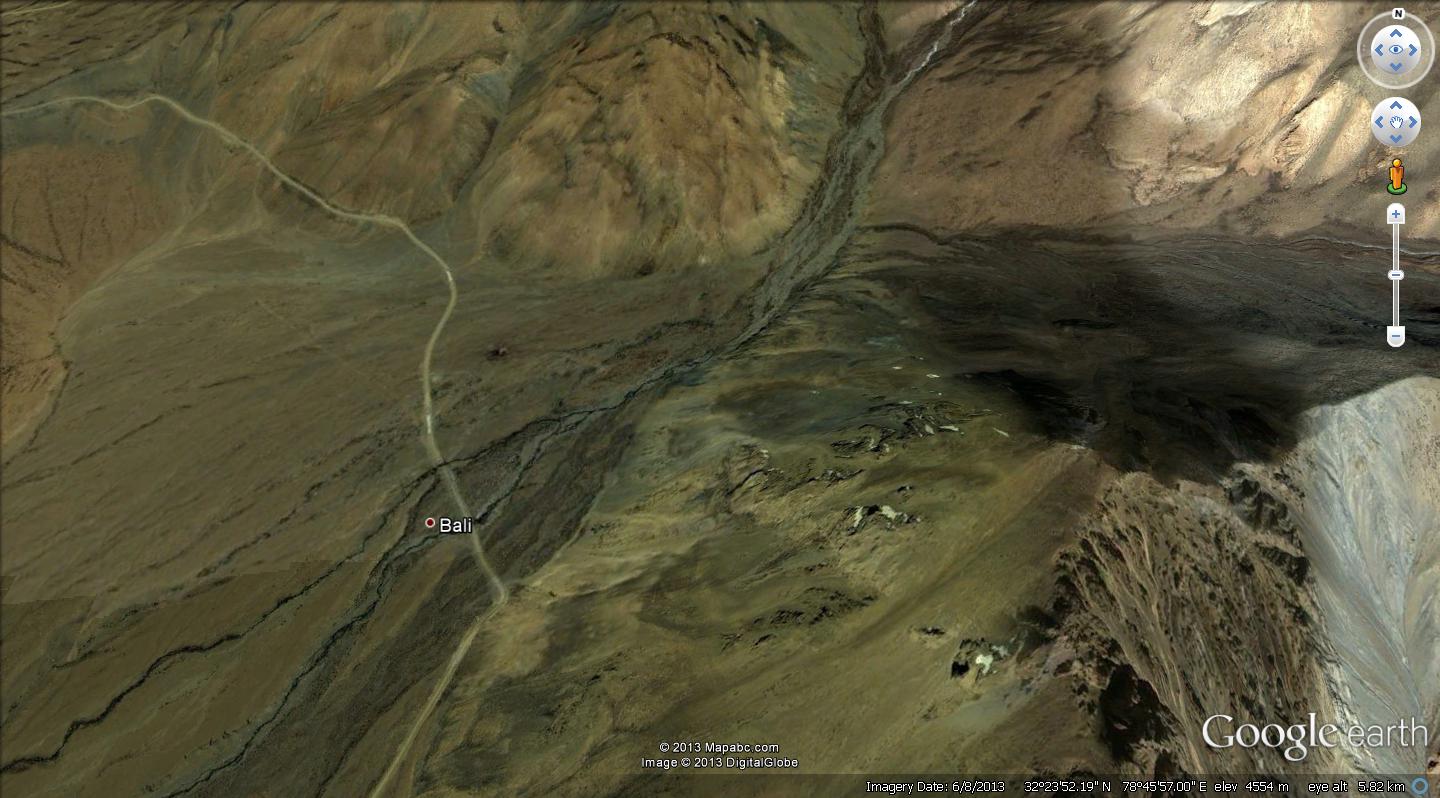 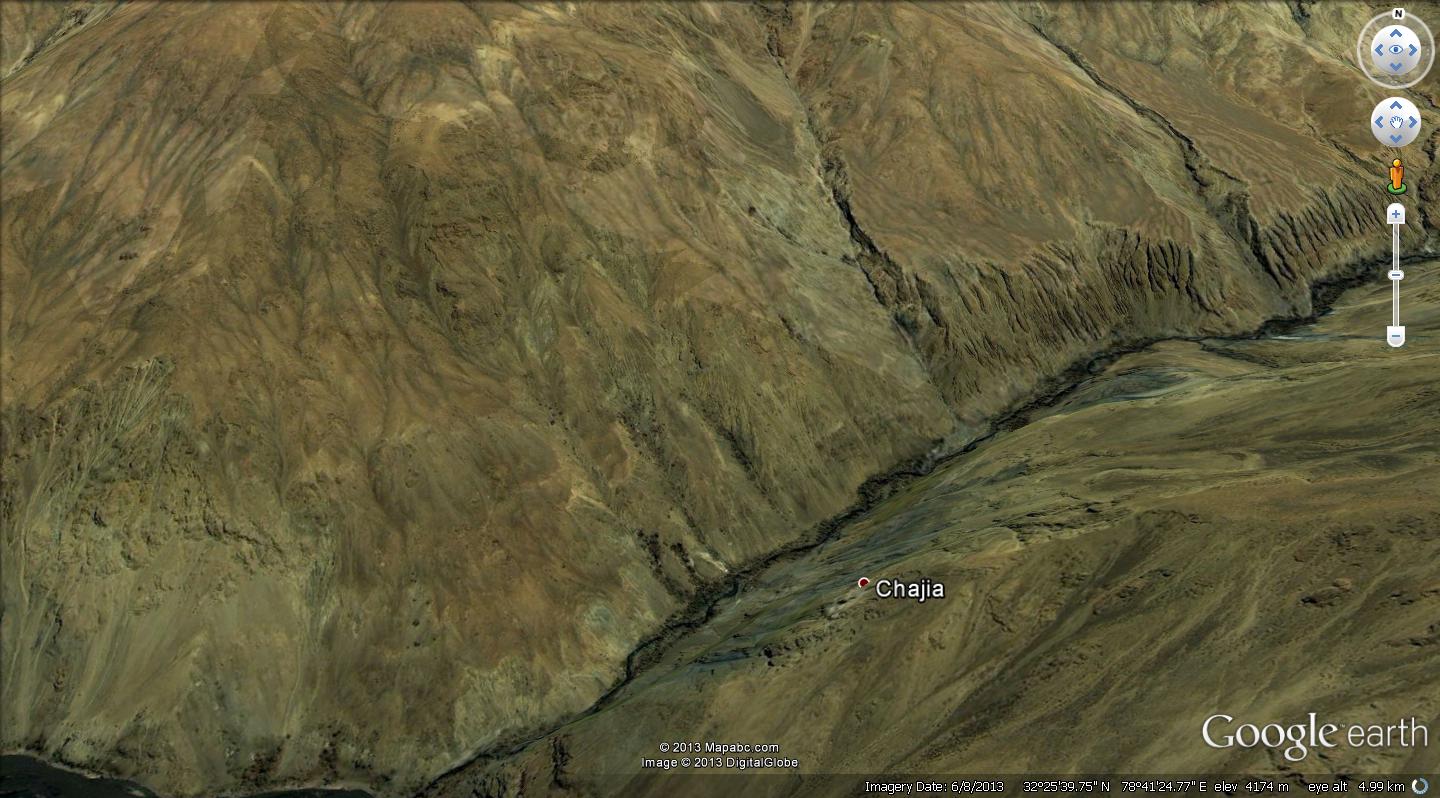 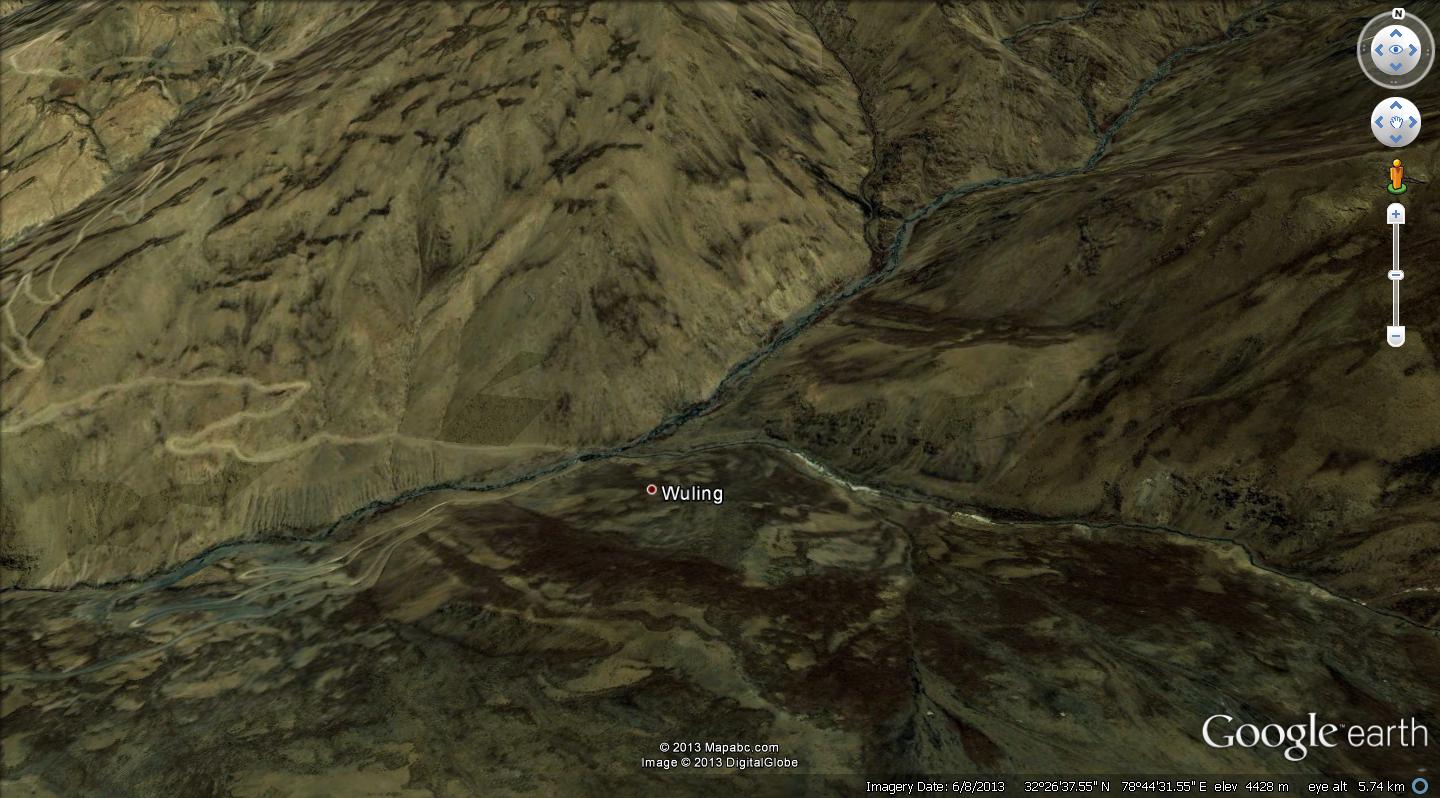 The Pare chu lake. In 2002 it was blocked by a land slide and when that burst even Rampur Bushair, about 280 kms downstream on the Satluj- suffered from the resultant flood. There were two floods again on the Satluj probably caused by land slides on this lake, but they were contained by the Wangtu hydel dam that had been finished in 2003. > 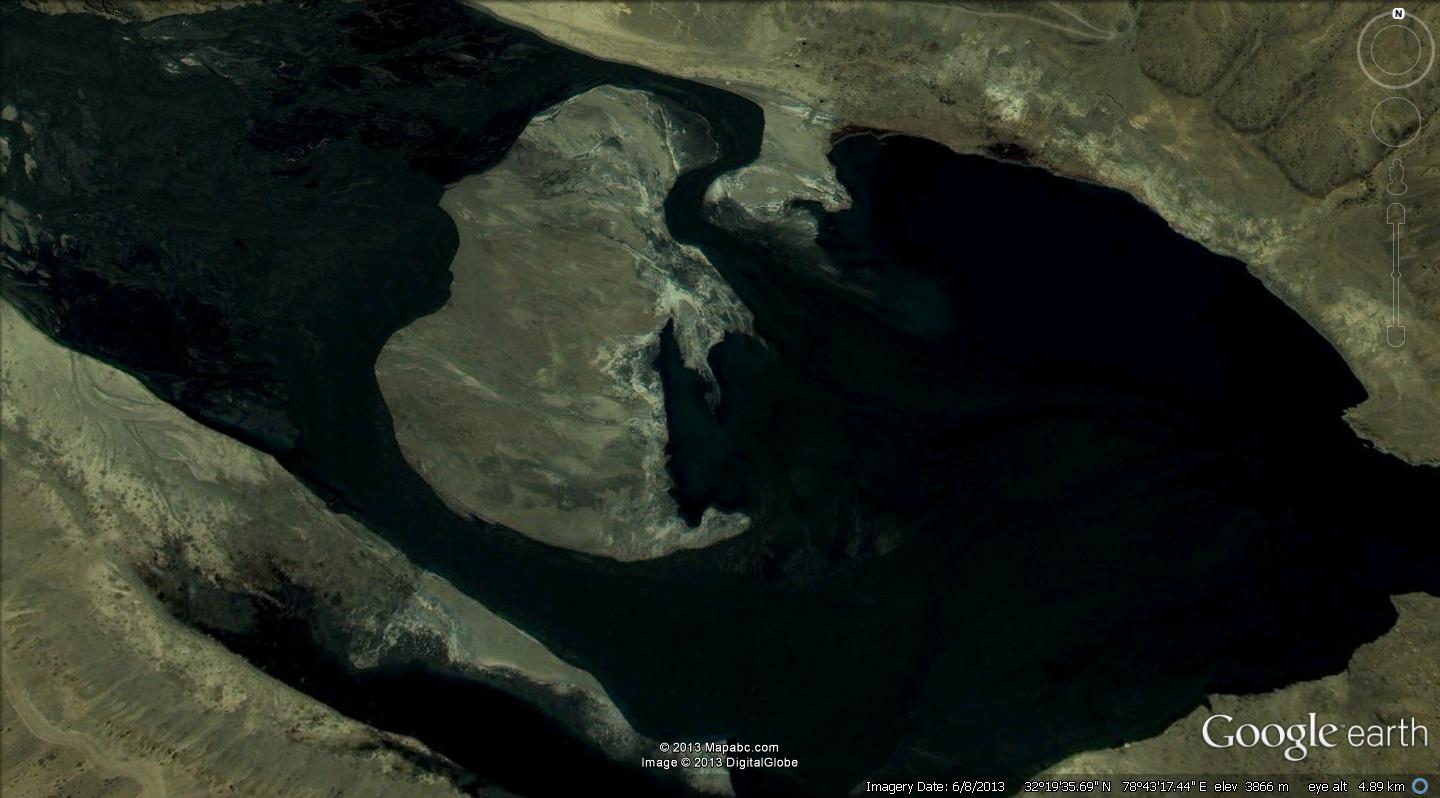 The image below is of Gya peaks, the highest of which is 6833 m high. The borders of Himachal Pradesh, Ladakh and Tibet meet here. These peaks rise to the SW of Chumar. A picture of these peaks above Chumar I have put in an earlier blog of June. 2010 called Of some las  etc.. http://bameduniya.blogspot.in/2013/08/chumar-its-location-and-explanation.html > 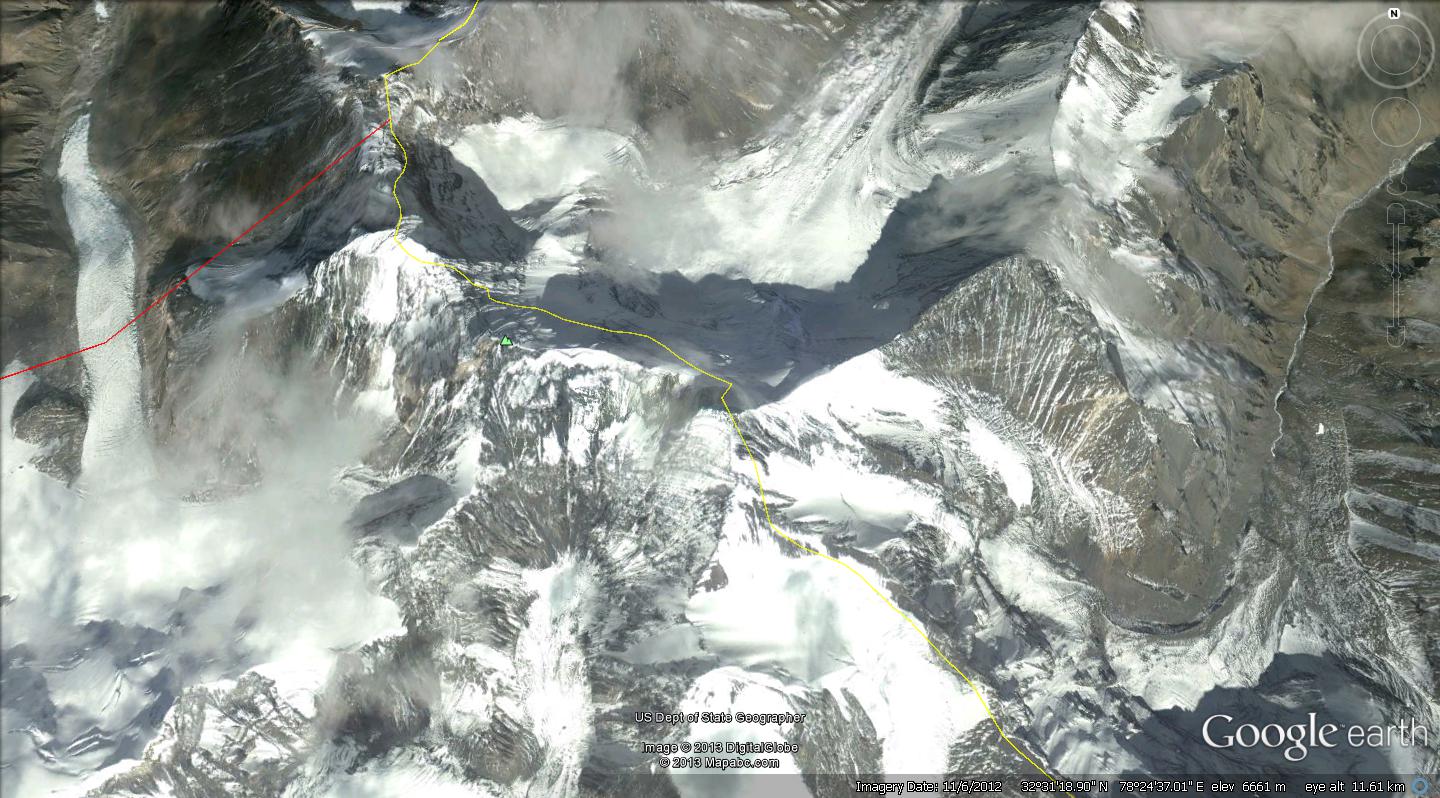 Below are two maps of Chumar and southern areas prepared by the US Army SErvices in 1954 and available at the Texas University site given at para 7 above. These maps are not very accurate, but they give a good idea. > 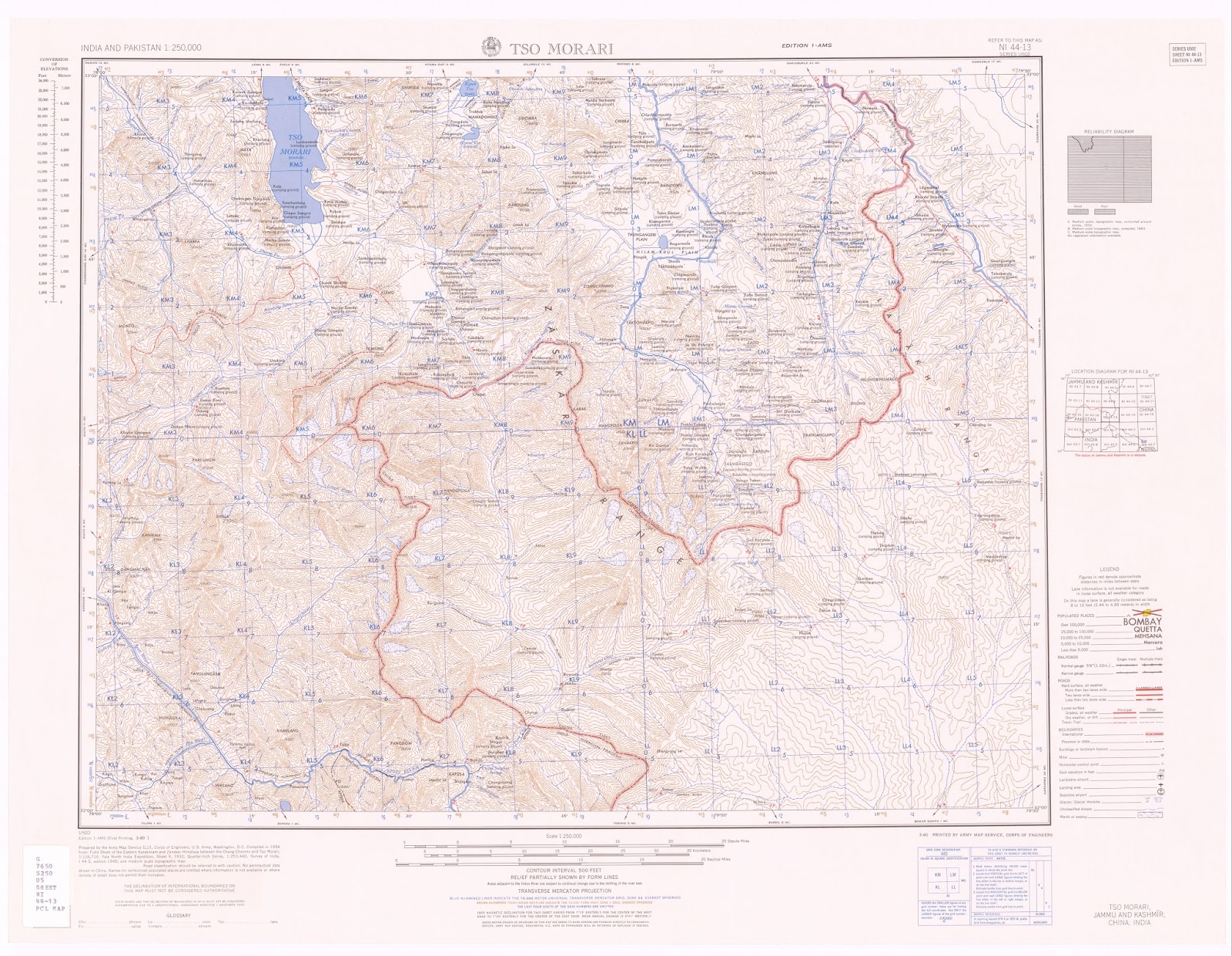 And this one shows the Drongmar Ridge and Shipki la> 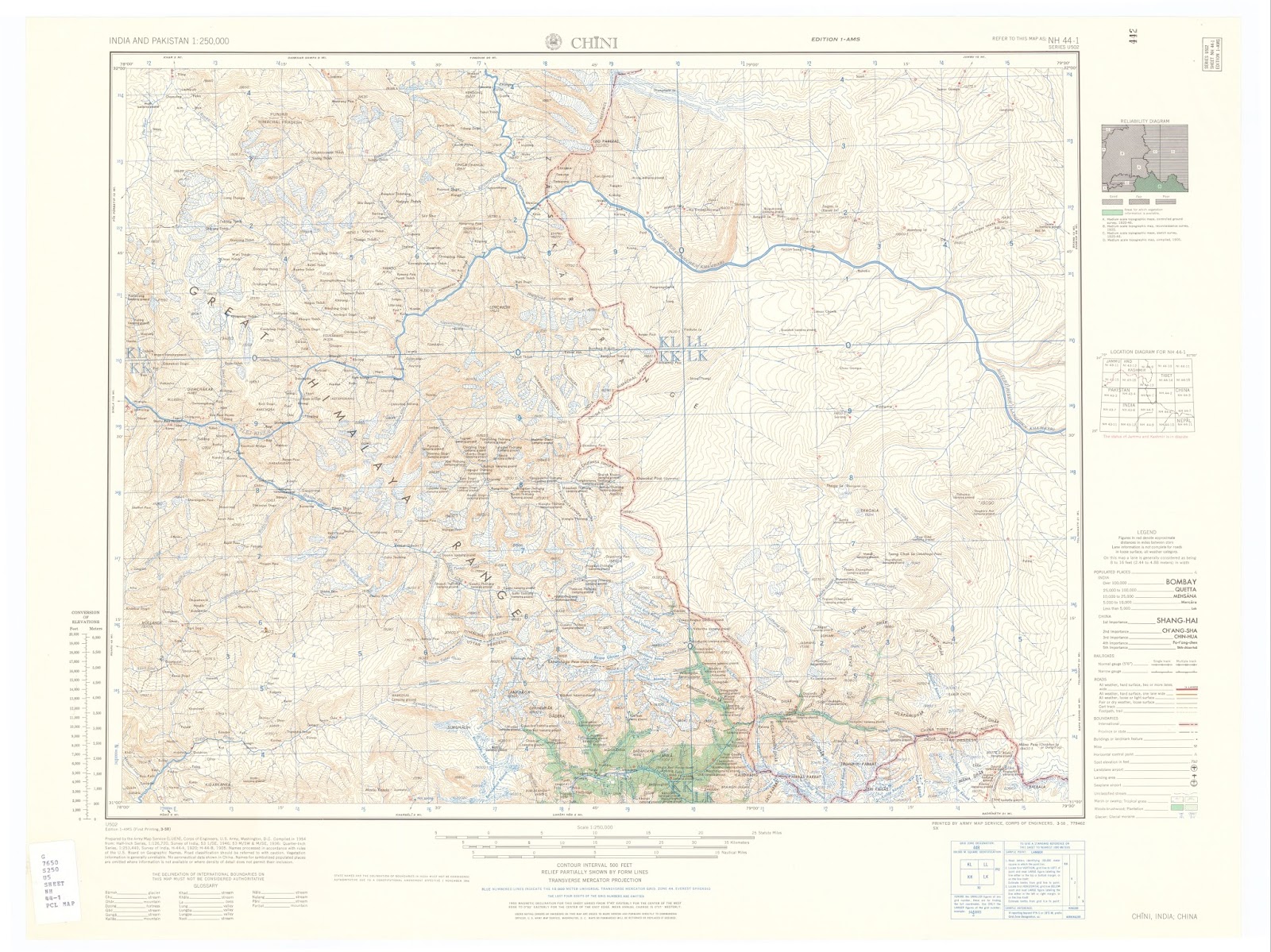 Posted by Bame Duniya at 3:53 AM No comments: