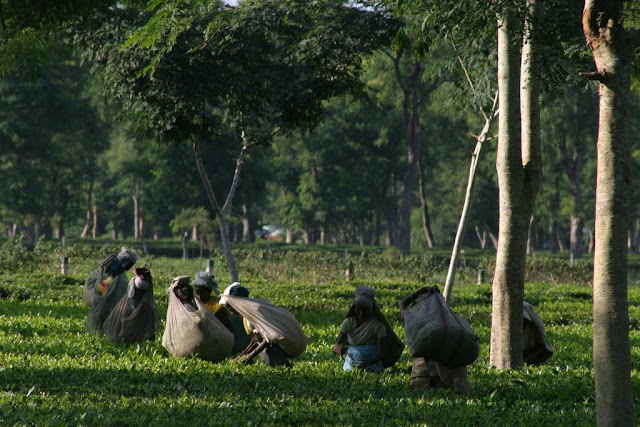 There are more than a thousand tea estates in Assam. Much less than half the labour working there is permanent. If they made all permanent they would have to give them many labour rights which would cut into their immense profits.

At the time of Independence there were about 800 tea estates and each one had at least a medical dispensary if not a hospital and most had schools. Today less than half of these tea estates have hospitals and fewer have schools.

At the other end the Managers and Asstt. Managers and other officials live a comfortable life in air conditioned surroundings. And to protect their creature comforts they have guards. These guards became necessary about two decades ago when there were a few abductions of tea estate officials. One of them was killed and the rest released after paying large ransoms.

For the past eight years there has been little trouble from insurgents. What trouble there is is because of restive labour demanding better pay and working conditions and even permanence.

Yesterday, I read a report in The Hindu (pg. 16 of the New Delhi Edition of 29th September, 2009) . It quoted one Mr. Aditya Khaitan, Chairman of the Indian Tea Association as demanding that the Government pay fot the tea estates' security! Can anything be more ridiculous? And alarming. This same worthy has bragged that they give a lot of facilities to the tea garden workers and these work out to be about Rs. 7/- (about US 20 cents) per day per head. Their generosity is astonishing. Omitting to mention that more than half the labour, without whom they would not be able to do produce tea at all, is temporary and thus not entitled to these so called benefits.

They have asked for the Government of India to subsidise their security saying cheekily that this has made the tea more expensive by Rs.1.50 (US 4 cents) per kg! These bleeding hearts are shedding crocodile tears about tea being expensive for the common man. Forgetting that it is their heartless pursuit for huge profits that is responsible for most of the price increases for this brew adored by the ordinary Indian as well as the elite.

I remember after a Manmohan Singh Budget in the late 80s when Central Excise Duty was removed from tea there were expensive ads palced in all the newspapers by the tea companies saying that tea will be cheaper now. It was. But for less than a month. After that the prices continued their insidious crawl ever upwards.

And for this shameless profiteering Big Business wants their security to be free? They want the Government of India to pay about US $ 3.5 mln every year for their guards. or else tea will be more expensive. Yet another excuse to raise prices.

Recession or no rescession Indians are not going to give up tea at all. They can keep charging more and more for it and people here will keep drinking it neverthless. They develop a convenient social conscience only when they have to pay taxes or get concessions otherwise they treat the tea labour as slaves.