Himalayan agony of mid June- Give the Government a chance

Hundreds of years ago the temple at Aghstmuni, above the Mandakini, and on the way to Kedarnath was swept away in a massive flood. In the Dhauli valley, higher up the mountain above Tapovan's hot spring, is a place called Bhavishiya Badri (Future Badri), where a legend say Badrinath will be eventually established as one day it will be swept away. Such devastation is not new in the Himalaya, and certainly has little to do with deforestation.

As realisation of the immense tragedy that had struck from Pithoragarh district in the East of Uttarakhand to Kinnaur district in the NE of Himachal Pradesh, was sinking in, the know all donor driven environmentalists, big and small, had already started crowing over the TV channels- we told you so! Man made devastation they screamed righteously. Giving too much credit to ordinary mortals.

Not a word of concern was spoken for the thousands of pilgrims marooned, stuck and dead or dying, and the hill people whose lives and livelihoods have been shattered for a longer time. With scarcely a suppressed smirk all were pitching into same old practiced and meaningless speeches repeated at every gathering- especially international ones.

Their pathetic minds would not understand the fact that this was an unprecedented disaster, much bigger than that caused by chopping of trees. A behemoth cataract had poured its inexhaustible contents over an area about 600 kms in length and 150 kms wide. No puny human hand could have been responsible for that wide spread a devastation. Undeniably there is wanton and savage destruction of the environment but that was not the cause for this tragedy, nor is it the time to bring such meaningless twaddle. A friend of mine, who was climbing Jaonli peak above Harsil on the 14th of June, says that they were at a height of about 18,000 ft (well above the tree line) and so much debris was dislodged by so much rain, sleet and snow that it looked like lava pouring down the hill sides.

Similar but lesser floods have been hitting the hills every few decades for thousands of years. There is a cycle of inevitability to such excesses of nature. The last one that I remember was in July 1970 when similar heavy rains, but not as wide spread, caused horrifying floods on the Alaknanda and the Bhagirathi. An iron bridge on the Bhagirathi before the climb to Sukhi had been twisted like a cork screw.

Another flood that destroyed in the early 80s a bridge over the Bhagirathi after Gagnani. This picture was taken in June 1984. The earlier road was on the right bank. Attempts at aforestation can be seen. After the Maneri dam was built I think that no bridges or roads were mangled till this extraordinary cataclysm of mid June 2013> 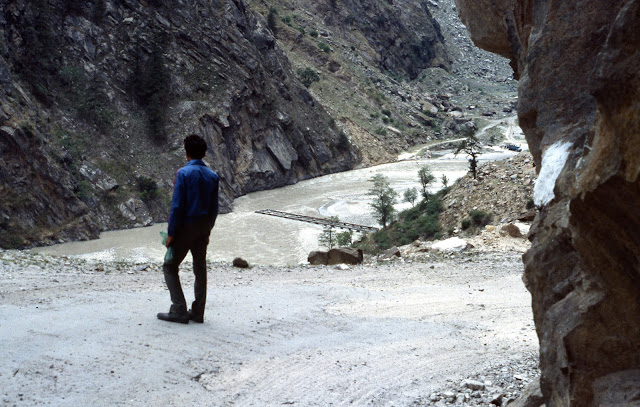 At Reni village near the spot where the Ramni ganga emerges from the Nanda Devi sanctuary giant fir trees were hurled like rockets to be pulverized into splinters against the right bank of the Alaknanda. This was uprooting caused by the pressure of an advancing huge wall of water gushing down that once narrow gorge.   The Gohna tal on the Birehi Ganga demolished. its western bank entirely and released its waters into the Alaknanda. Amongst the thousand or so who died in the combined cataclysm were passengers of about 40 buses that had been stranded on the road to Joshimath. These hapless souls were swept away by the rising and heaving Alaknanda. At that time there was fortunately no TV and environment had not become the profitable business that it is now. People from all over rushed supplies and man power to help those in distress. The Government was then as it is now the main provider of succour.

This mid June watery calamity is much bigger than the one of 1970. To blame such disasters on mere deforestation and a handful of dams is insanity and unprincipled self promotion. Had these conceited environmentalists agitated earlier for constructing diagonal rock fill bandhs they could have done some service. But they can only think of trees and dams.

Do these environmentalists know that in the past 20 years more trees have been planted in the hills than cut down? They do, but, without substantiation they all say that these figures are false! If they acknowledged that these figures were correct it would be bad for their business.

Another favourite target of this lobby is dams in the hills. The present tragedy would have been much larger had it not been for the dams. The Tehri dam's level rose by 20 metres but was contained by it. Similarly Maneri dam the next one which is about 100 kms above (and not "back to back") the Tehri on the Bhagirathi held back much of the explosive force. Some water had to be released but wide spread damage was checked.

The horrific shots of buildings plummeting into the raging waters were inevitable judgement, which ought to have attracted the ire of the prophets of doom, but did not. No construction within 100 mtrs of the river banks is allowed and yet these hideous concrete monstrosities had come up with official connivance. On the banks and mid streams were office complexes (SSB at Shrinagar), dharamshalas, temples and statues. The scornful rivers brushed them aside as if they were twigs.  I hope lessons will be learnt for the future.

The population in the hills is increasing. No longer are these hills resorts for the rich and centres of pilgrimage. They have to provide sustenance and employment for their people. For that infrastructure has to be built. That means electricity, roads, improved agriculture and connected industry. This requires development and the people in the hills want that. In this connection I shall tell of an experience that I witnessed in the summer of 1990 or thereabouts.

I was returning by bus from Uttarkashi through the old Tehri town, which is now submerged. The bus was crossing the old girder bridge that overlooked the dam that was coming up. In front of that massive wall was Sunderlal Bahugunah on his fast against the dam. As soon as the passengers in the bus saw him they burst into abusive laughter. At that time I was quite a fan of his. Puzzled, I asked why were they reviling him so mercilessly? They said Sunderlal was against progress. With these dams coming up, they have electricity, their children can study late at night and not have to go to bed at sundown, already employment has increased so much that most of them do not have to go to the plains for menial jobs. Well 23 years later the change is there to see. engineers, doctors, bureaucrats, businessmen, scientists, pilots etc et al are coming from here.

All this is due to what the environmentalists and their friends in the media say is a man made disaster? They ought to spend a life time in the hills and will then know that there is no going back. Development is a must, and will continue. No matter how shrill these few people may get. I only hope that this development will not be cornered by real estate lobbies. And since when has the CAG become an expert  on the environment? They ought to stick to accounts only, for that is what they are trained for.

Postscript added on 25th of June, 2013-  "Dams Controlled Floods .... "  From Indian Express of today-  http://www.indianexpress.com/news/dams-controlled-floods-says-water-panel-chief/1133470/ Don't ignore voices such as these and listen only to environment wallahs.

Give the Government a chance instead of tarring it for this disaster and delay in relief. With roads gone, skies overcast, and no bridges even hardy and gutsy soldiers of the Army, Indo Tibet Border Police and the IAF will take time to get every where. Let them do their extraordinarily tough job. The TV channels ought to stop hitching rides as they are blocking some needy person's place.

Till the early 60s there used to be check posts at Rishikesh where names of all pilgrims used to be entered. Perhaps in this computer age a faster system of recording details of every pilgrim should be kept. For such natural blows will occur again after some decades as they have been doing for ages in the past.
After the pilgrims have been taken to their homes the relief and reconstruction will inevitably have to focus on the hill folk. I hope that this time attention will be on the deserving, mindless of gender and status. Why do I have these fears?  Immediately after the October, 1988 earthquake in which Uttarkashi suffered enormous damage, I had gone there. Below the Maneri village school I heard a low whisper like wail. I followed it. It was coming from the School grounds where about fifty injured women had been left to wait for medical aid. The men, even with slight injuries, had helicoptered away to hospitals in the Plains. Similar distress I saw on the way to a village (I don't remember the name now) below the Kush Kalyan forest from Malla.

The Satluj dam near the old village of Wangdu. This dam has, I am told, reduced havoc of the kind that had contemptuously swept away the old iron bridge (built in Sheffield, UK) and village in the flood of 2002. There never were no trees on the left hand side so environmentalists  should not jump to nasty conclusions. However aforestation is beiing attempted on this windward side. On the leeward side to the left there are many trees> 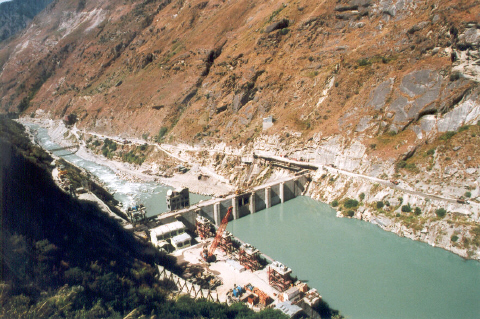 This is the entrance to an ambitious hydel project where the power generation is inside a huge cavern. Electricity is produced by dropping a part of the Babha river through tunnels and turbines. In the 2002 floods there was silt well inside this unit. The Wangdu dam had saved this from further trouble, though I do not know whether it has been affected again by the June flood as the sluice gates had been opened to allow collected waters to exit> 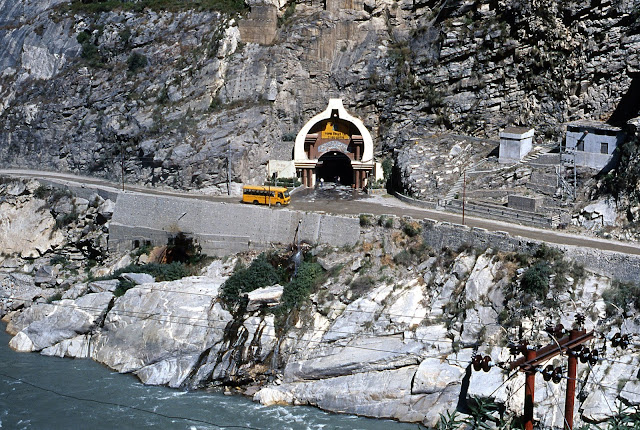