Deforestation in the North East of India

I was first in the North East twenty eight years ago. At that time the North East with just 7% of India's land mass had 24% or so of India's forests. Today it has only 12% or so of India's forests. The future looks bleak. Yet, no one is bothered. Slaughtering of trees profitably (for a few) continues in nearly every state. The 2007 Forest Rights Act that would have given indisputable rights of ownership upto a maximum of 4 hectares and prevented larger land holdings has not been implemented. Consequently individuals own hundreds of hectares while some have none.

Meanwhile the plunder goes on. The wild animals unable to find food within forests have taken to marauding in well trop paths. Humans who used to depend on forest produce have to buy wood chips that they could collect easily, even though their right to do so has been protected in the Forest Rights Act of 2007. 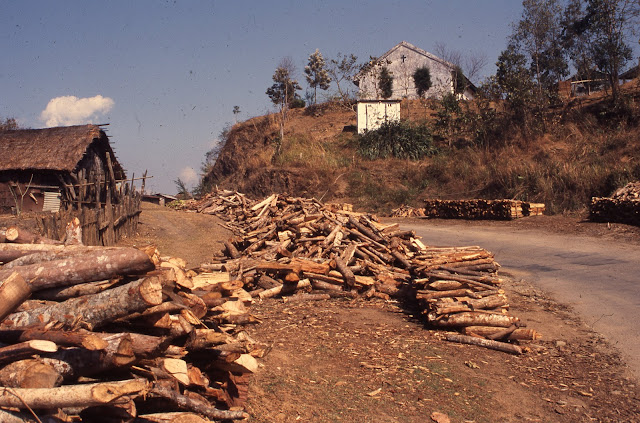 In  this blog I shall ﻿only show old photographs of abusing the environment along with some recent ones to show that nothing has changed.  Pictures are better than thousands of words. 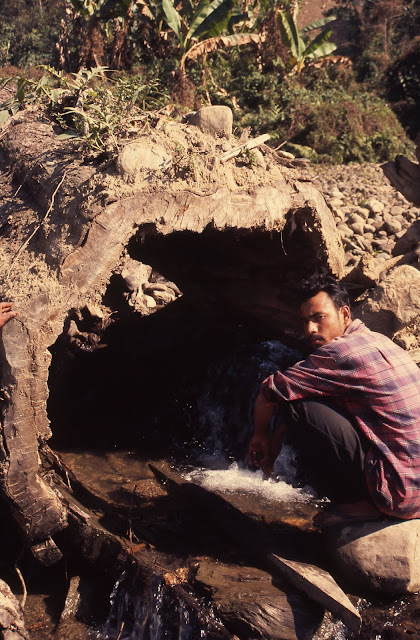 (This average sized section of an ordinary tree gives an idea of the magnificence that is being hurt by the axe- Mon, Nagaland 1991) 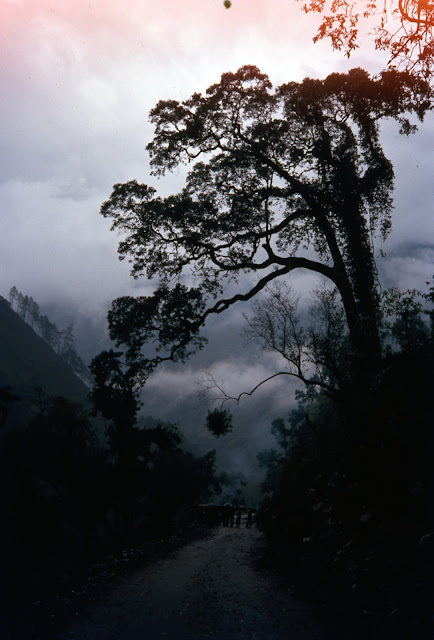 (A huge hollock by a road in Yingkiong, Arunachal in March, 1987 stands alone. Its neighbours hacked to pieces.) 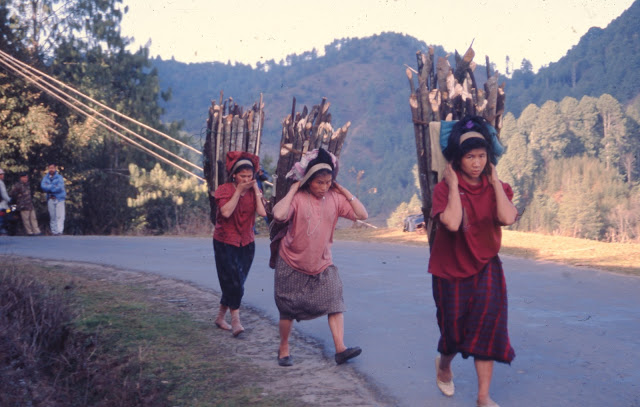 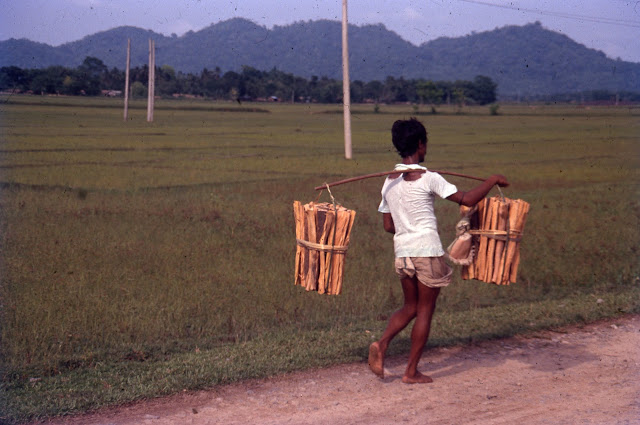 (Near Nagaon, Upper Assam, April, 1999- More kilometres to walk to get less wood. This man will sell this stock.....) 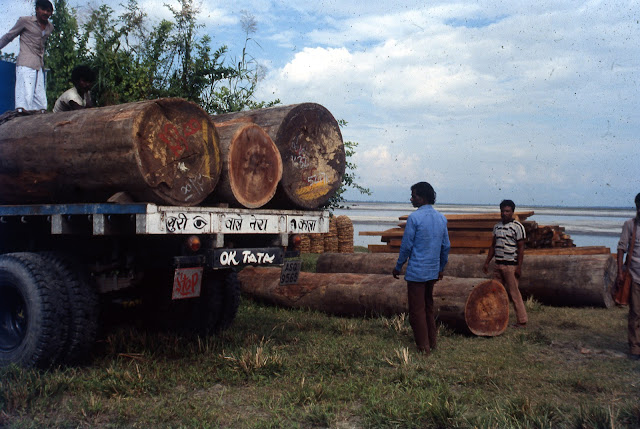 (....While big businesses collar vast forests (2003) for their huge profits- Near Dambuk on the banks of the Mighty Brahmaputra a part of a tree is unloaded to go to a Plywood Mill in Assam.) 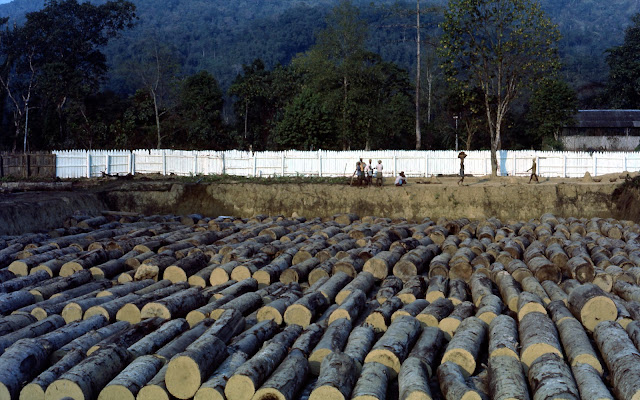 (To be devoured by Plywood mills like this one in Jairampur, Arunachal) 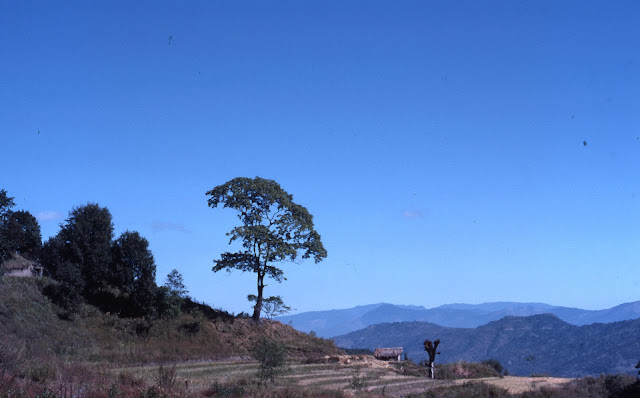 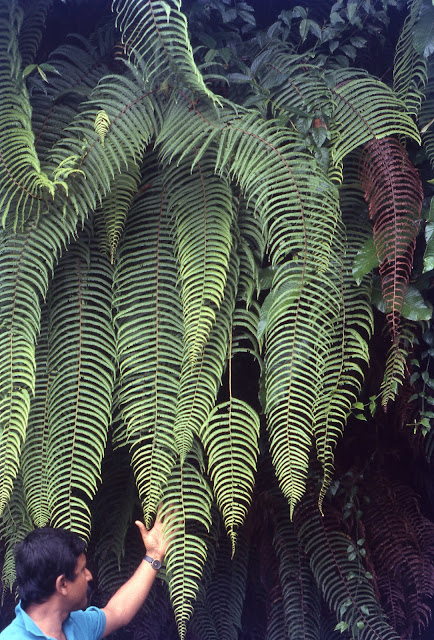 (With such heartless decimation such luxuriant undergrowth like this tree fern near Mokokchung, Nagaland is also disappearing irrecoverably.) 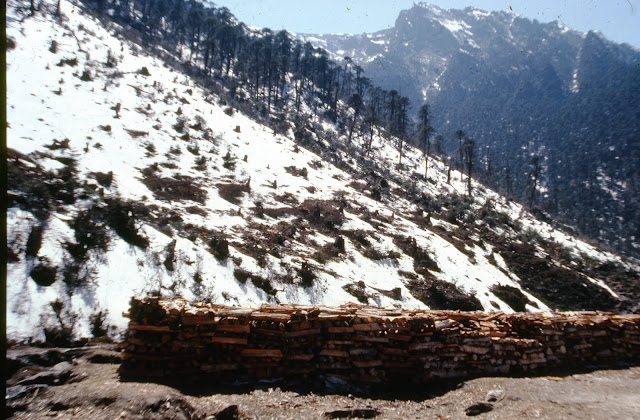 (No part of the North East is denied its share of deforestation; Se la (pass) at 13,734' where each fir takes about 10 years to grow 1' is demolished in hours.) 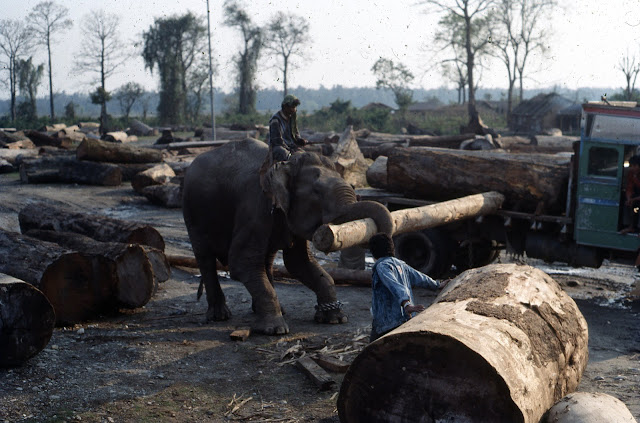 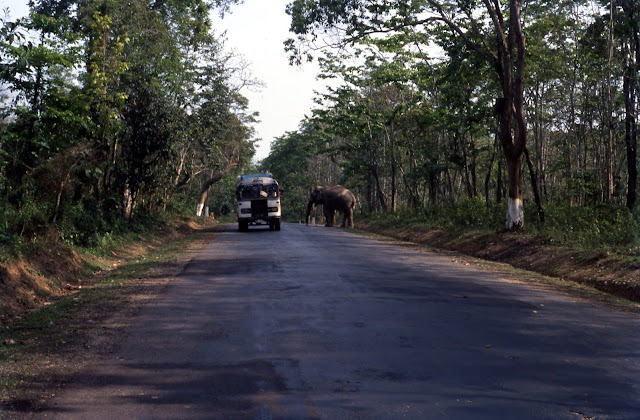 (While their unfortunate wilder cousins in the jungles have to humilatingly forage for food by holding up traffic to somehow exist. All because of shrinking forests have reduced the 70 kgs or so of foddeer that they require every day to 40.) 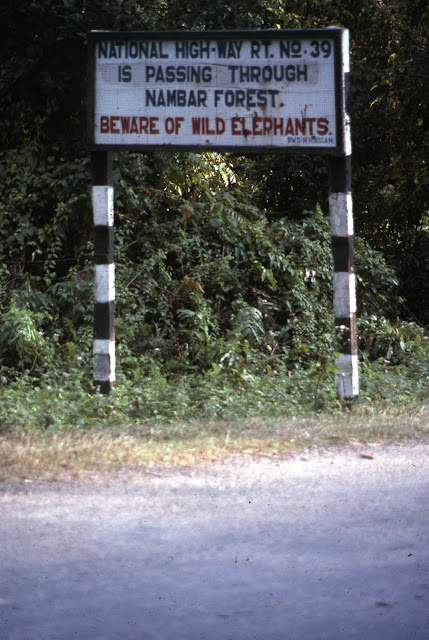 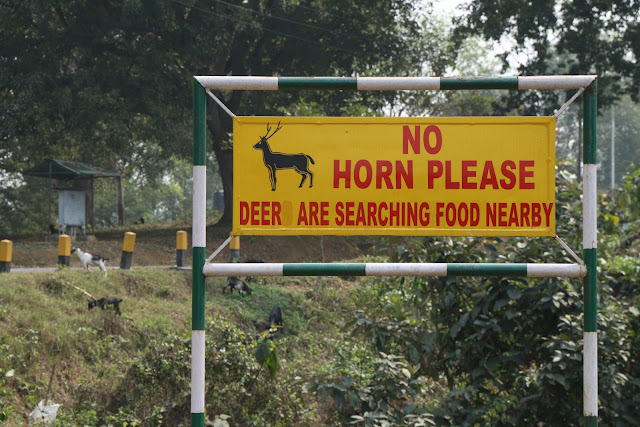 (Now signs like these abound all over Upper Assam. Dumduma, March, 2010) 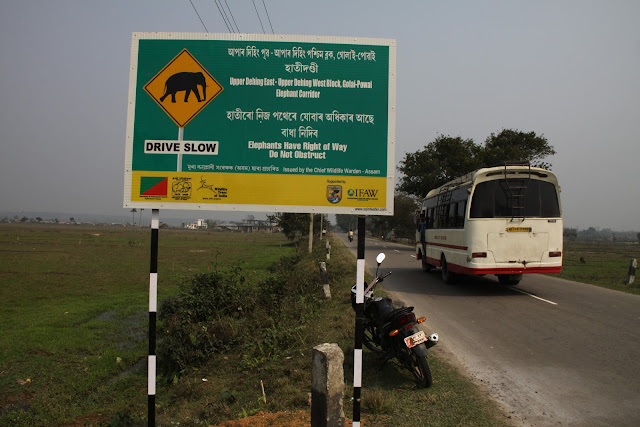 (And this warning about elephant walks- March, 2010) 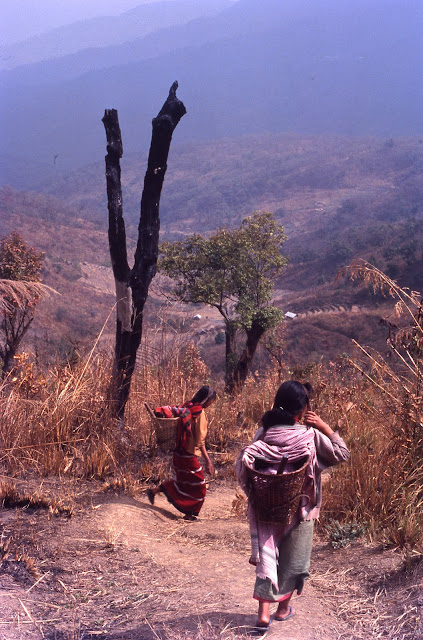 (This once was a leafy forest with running brooks. In April 1991 the last remianing trees were stripped of their glory and burnt- Ukhrul, Manipur, April, 1995) 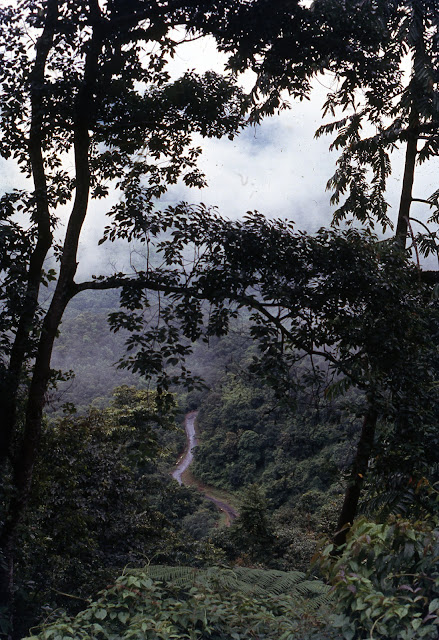 (Such as this forest in East Khasi Hills, Meghalaya which was being surreptitiously cleared in May, 1991) 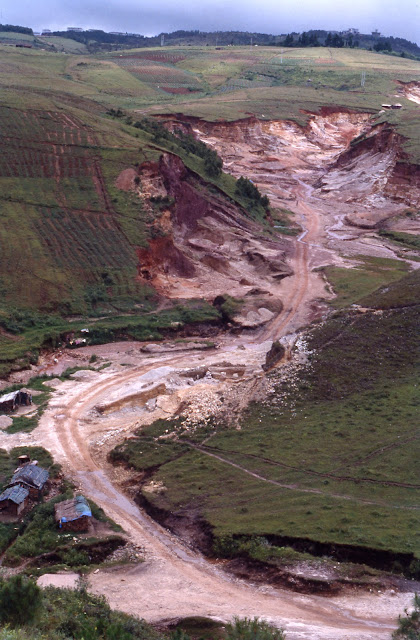 (By now it must be like this hill side south of Laitkor, Shillong in June, 1990) 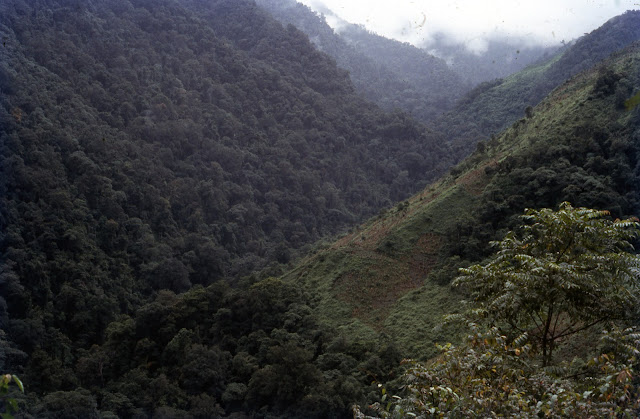 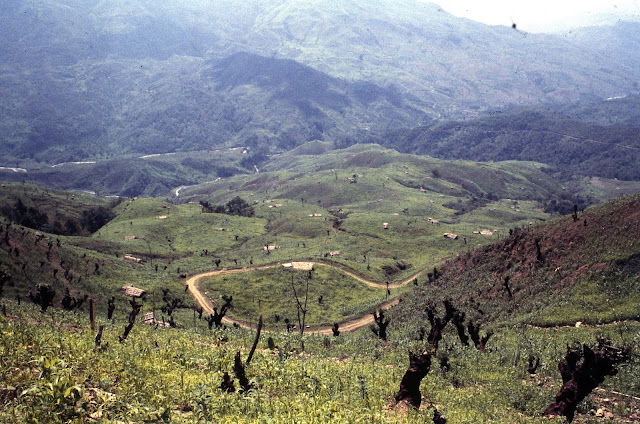 (Like this scorched hillside in Mon, Nagaland, April, 2001. This is a jhummed or swiddened field. The cycle was 30 years or so about 3 decades ago. Now it is about 2 years! ) 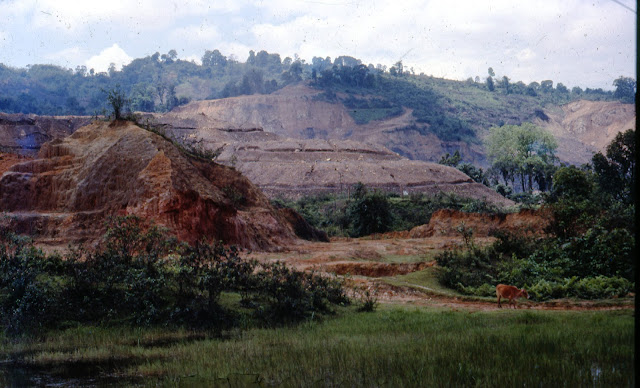 (Another kind of massive degradation. In the uppermost corner of Upper Assam, near Ledo, are the coal fields of Tirap. Here the forests are stripped and then the earth torn to reach coal) 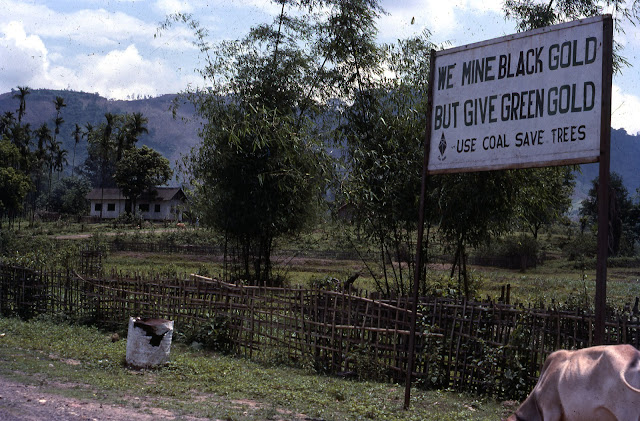 (And then the Company puts up feel good signs like these that fool no one except themselves, who are the ones who feel good) 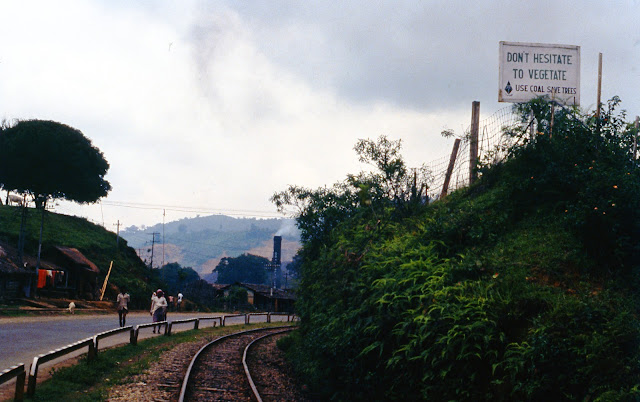 (But this one gets the leather medal for utter cynicsm and bad English!) 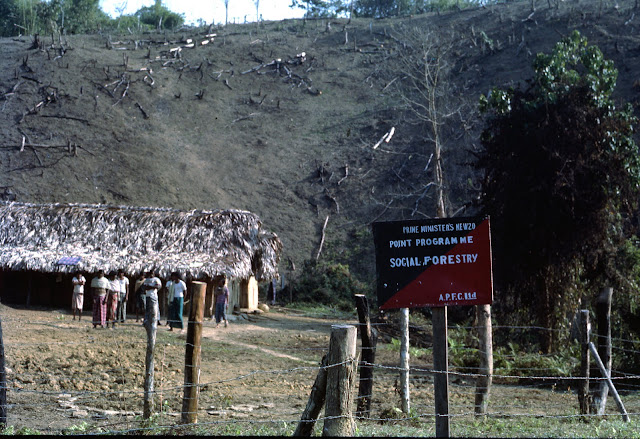 (Another vapid excuse for deforestation. A healthy forest devastated to plant bamboo perhaps! Nampong, March 1984--    The point of these pictures is that the same old excuses are being trotted out today and no one is bothered) 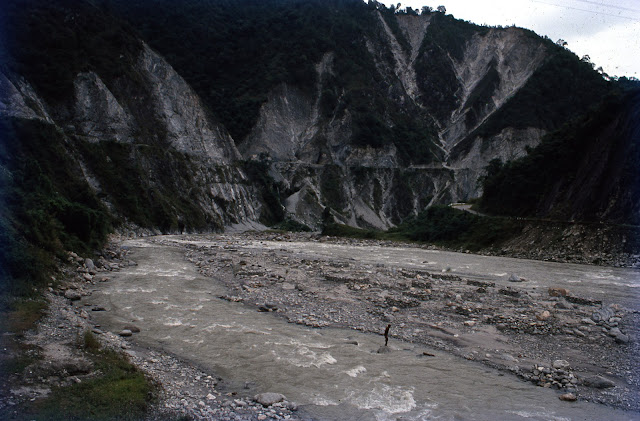 (Mountains continue to be deforested, blasted, wrecked, vandalized and dynamited.  Roads  are essential but the destruction is much more than necessary.) 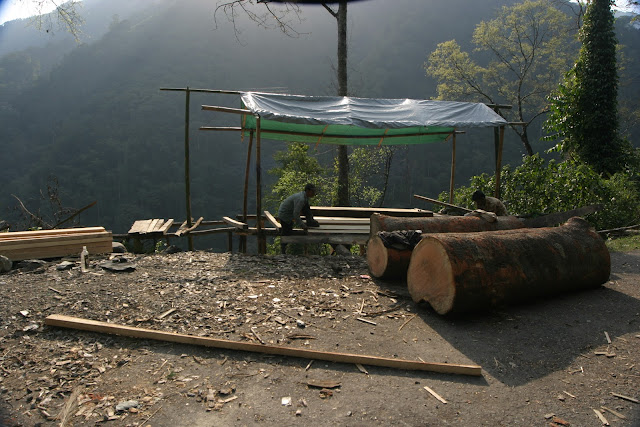 (And so the axe keeps cutting. In some forests its been replaced with mechanical saws....  March, 2010 near Hayuliyang, Arunachal Pradesh)

Deforestation like this is common the world over but more in the hapless orth East of India. Greed and collusion between contractors and bureaucrats is responsible for this degradation but those in power are indifferent.

This is very important. You need to publish these pictures in local newspapers to ALERT LOCAL COMMUNITIES. Only that can save us.